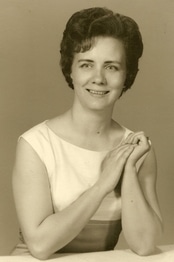 Born on October 23, 1926, she was the youngest of four children born to Victor Monroe Hyden, Sr., of Boston, MA, and Maude Sterling Hyden , of Ireland.  Maude immigrated with her widowed mother to the USA in 1907, meeting and marrying Victor, who was a WWI Army pilot stationed in San Antonio, TX and, after the war, an oilman for Phillips Petroleum in Texas and Oklahoma.

When Ruth, the eldest child, was an only child, the young family was in Boston visiting relatives when an automobile struck Ruth leaving her with a brain injury so severe that she was disabled for the rest of her life.  As Shirley grew up, helping her mother take care of her oldest sister, she learned much of the sweetness and gentleness that endured throughout her entire adult life.

As a teenager in Eureka, KS, she became a drummer in the Eureka High School marching band along with her older brother, Vic, who was a classmate with another drummer in the band: Kenneth Schult.  Only a sophomore, she nevertheless caught Kenneth’s eye who knew from that day that she was the one he was to marry.  When Kenneth graduated in 1943 WWII put a temporary hold to their plans.   While Kenneth was serving in Europe Shirley graduated from high school in 1944 and enrolled in Kansas State Teachers College in Emporia, KS, that fall.  As a student she contributed to the war effort by working for Phillips Petroleum in the tradition of her own father.  Though she always wanted to go to Washington, DC, to work for the war effort, that dream never materialized.

However, after the war ended, she married Kenneth Schult on August 25, 1946, and became the mother of four children (Keith, Robert, Jeffrey, and Jeanine).  She joined The First Church of Christ, Scientist of Boston, MA, in June, 1953.  She remained at home to raise the family during their formative years, but finally returned to the work force in Ottawa, KS, with Household Finance in 1962.  During the summer of 1963 she took class instruction in Christian Science with William Reid Johnson of Tulsa.  Mr. Johnson had been taught by Bliss Knapp, one of the early students of Christian Science, who had himself taken class instruction from Mary Baker Eddy.    When the family moved to Kansas City, KS, in 1964 she joined the Westgate State Bank of Kansas City, KS, where she worked until 1984, rising to Vice-President of the bank.  That year the bank was sold to new ownership and she then joined her sons in their retail framing business.  For the next twenty years she participated in the administration and growth of that business from two retail frame shops to a nationwide design and manufacturing business with clients in the entertainment and restaurant industries.  As the business grew from just four owners with no employees to a workforce of over 80 employees Shirley took on the managing of the front office.  It was commented that she took great enjoyment from working with her sons on a daily basis.  When the business was sold in 2003 she helped the transition to the new owners and then retired in 2004 at the age of 77.

After retirement she took on the care of Kenneth, her husband, with her typical gentleness and sweetness.  When her daughter Jeanine, and her family, moved into the home to help care for both parents Shirley enjoyed her remaining years in a close relationship with her daughter.