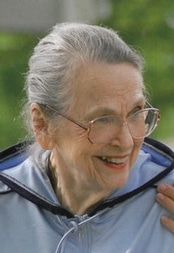 Susan Woodward Pearson left us on January 26, 2011 after suffering a severe stroke. Susan was born on April 5, 1917 in Rocky Hill, Connecticut, the youngest of three girls.
After completing school in Rocky Hill, Susan went on to further education at Mary Washington College in Fredericksburg, VA, graduating with a degree in Home Economics. She began her career in the food industry which eventually took her to Topeka, KS to join the Gas Service Company serving ultimately as Director of the Home Service Staff.
In 1950 Susan met Thomas F. Pearson Sr. who was widowed and raising two children. They found many things in common and married on January 16, 1951. In 1972 Susan and Tom retired and they hit the dusty trails in their Holiday Rambler. These were many wonderful years but after Susan caught Tom dozing at the wheel more than once they decided to plant their anchor in Fort Myers, Fl. In 1996 they felt the need to be closer to the family and settled in John Knox Village in Lee’s Summit, MO. Sadly Susan lost her beloved companion in November, 1998. Throughout her life Susan was a proud member of the D.A.R.
She was preceded in death by her parents Maxwell Eugene Woodward and Mary Camp Woodward and a sister Catherine Woodward Rice. She is survived by her daughter Daisy Dorothy Patton of Shawnee Mission, KS, her son Thomas F Pearson Jr. of Buckner, MO, her sister Elizabeth Woodward Davis of Lakeland, FL. and her many grandchildren, great grandchildren and her great, great grand child, to all of   whom she has been a great friend but always wished she could keep their names straight.
There are no visitation plans scheduled and interment is planned for later when the family can be brought together.
If memorial gifts are considered the family request they be directed to the John Knox Foundation, 400 NW Murray, Lees Summit, MO 64081.