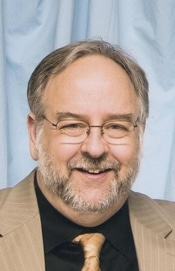 Tim Bond passed from death unto life into the arms of our blessed & living Savior Jesus Christ on Thursday, March 26th, 2009. He died from a surgery complication.

Timothy Wayne Bond was born in Stillwater Oklahoma on January 1st 1956.  He was the first baby born that day in that city & made the newspaper. His father, Charles Richard Bond, was stationed in Stillwater as an Air force Captain.

They moved to the south bay in Torrance California, where he lived & went to school, and graduated from Redondo Union High School in 1974.

He met his wife Debby in 1978 & married Deborah Bond on May 19th, 1979. In the couples’ twenties they became involved in a Church and Beach Ministry with Chapel by the Sea and both became Christians. They used their musical talent to help lead worship. They would have been married 30 years this May.

Tim was very intelligent & worked as a Senior Contract Administrator writing contracts for his company that made nav aid equipment. He worked with them for about 16 years, here in Kansas City. Through His contract work He also traveled the world visiting places like Egypt, Jamaica, Korea, Japan, the Middle East, and more.

Tim was very talented & generous with his audio talents using them in church production recordings, Easter & Christmas productions at Rolling Hills Covenant Church in California, Hillcrest Community Church in Prairie Village, and Lenexa Baptist Church in Lenexa, Kansas. He also did special recordings every year for the Shawnee Mission West High School choir productions, as well as making music cd recordings for other various groups and individuals. He spent time recording cds for various specialty projects as well.  He spent many summers doing audio at the “Thee Camp” summer camps for Junior High and High School Kids for Lenexa Baptist Church. He spent the better part of 25 years using his gift for the Lord and teaching others.

He was best loved for his wonderful sense of humor, and very loving unselfish attitude to help anyone anytime. He had great wisdom in computers, electronics and was a self learned type of person with great wit. He knew how to do just about anything without even reading a book.

Statements he was most known to say were “Ain’t no thing”, “Just Relax”, “Don’t worry. Be happy”. He was most often seen wearing his casual Hawaiian shirts, no matter where he went. He loved sitting in his favorite chair, hanging with His pups & family.

We know he is just relaxing with no more pain or worries, in the arms of our Heavenly Father & making jokes down the streets of the pearly gates, meeting lots of old friends.

We will miss Him & always cherish the time we had with Him. We look forward to being reunited with him some day in glory.

Memorial Services will be held April 7th at 1pm at the College Church of the Nazarene, 2020 Sheridan Ave in Olathe, Kansas with a reception immediately following at the Bond Household, for family as well as friends.

The friends and family of the Bonds have set up The Timothy W. Bond Memorial Fund in honor of Tim to help Debby & the kids out financially. If you feel led to give in this way in liu of flowers you may make a donation payable to: The Timothy W. Bond Memorial Fund. You may mail or deliver the donation to the Olathe Capitol Federal Savings Bank, 1408 E. Sante Fe, Olathe, Ks 66061. Donations can be made anonymously if desired. There will also be a donation box set up at the church.

John 11:25 Jesus said, “I am the resurrection & the life. He that believes in me, shall live even though He dies”.