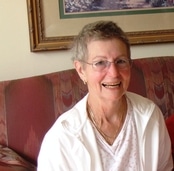 Ginny was born to Edward & Christine (Flemming) Heffner on April 1, 1941 in Ft. Worth, TX. She was a military brat born in Texas but lived throughout the United States, and eventually settled in Kansas. After high school she attended a nursing school where she was unable to complete her course of study due to caring for her terminally ill grandmother. While in Kansas City working at her career in home health care, she raised three boys on her own, insuring that they were always provided for. Ginny later moved to her beloved San Antonio, TX where she pursues LPN training, but doesn’t complete because her fight with breast cancer. She eventually returns to complete her physical life while volunteering in home health and hospice, completing two and a half decades of dedication, and prepare for her passage to heaven.

Ginny dedicated herself to taking care of those in need or less fortunate. She was strong in faith, and loved to sing in the church choir. Her home was always filled with music. She will be remembered for her Dr. Doolittle-like love for animals that included; guinea pigs, squirrels, rabbits, turtles, hamsters, gerbils, fish, dogs, beloved cats and birds.

Among the many loves of Ginny were; square dancing, where she designed and sewed her own her square dancing attire, bargain hunting, where she could a turn dime in to a dollar, her ability to be an incredibly fast learner when it came to technology specifically the computers set her apart for her generation, her passion as a self made amateur photographer, an avid seamstress which started out with making the boy’s clothes evolving in to home furnishings and square dancing attire, a skilled neighborhood barber who traded her services for family assistance – i.e. work on the house, an experienced traveler both domestically and in Europe, and finally a inspirational women who has literally touched the lives of thousands both directly and indirectly by providing her assistance/experience with being a single parent, cancer fighter for nine years, lupus survivor, hospice worker, and volunteer, Boy Scout Troop council person, and Cub Scout den mother.

She is survived by three sons – Mark, Paul & Matt and three siblings – Leila , Bill, and Steve. Ginny was the daughter of an Episcopal priest, medical doctor and Air Force officer, gemenologist and literary writer (Mother). Oh yeah, Can you say “Go Spurs”!! Online condolences may be made at www.heartlandcremation.com (arr. Heartland Cremation & Burial Society, Raytown, Missouri, 816-313-1677)