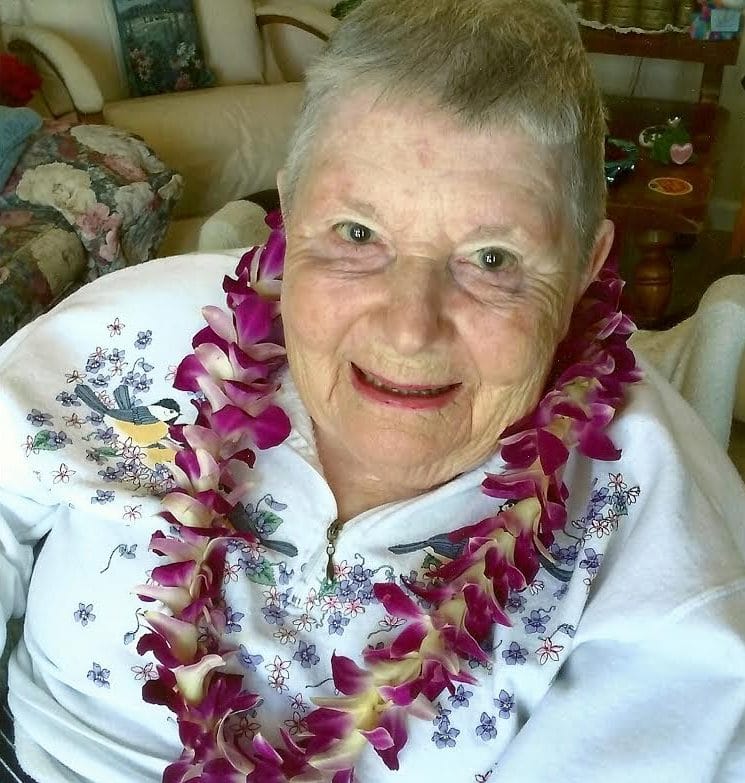 Alice K. Scheil, 96, passed away October 9, 2016. She was the daughter of William Henry Beisenherz and Marguerite Winifred Weis and was born July 9, 1920 at Caspiana, La. where her father worked on a pecan plantation. The family moved to Kansas City in 1922 where Alice lived the rest of her life. She graduated from East High School and Kansas City Junior College. She married George L. Scheil on November 7, 1945 and was married 64 years until his death in 2010. Alice worked at various accounting jobs while raising a family of two sons who survive her: George W. Scheil and Paul R. Scheil (Sara) along with two grandchildren: Betsy (Thomas) Ballieu and Luke Scheil.
Alice was involved with the Boy Scout program by being a Den Mother and a mother of two Eagle Scouts. She was a longtime member of the Raytown Christian Church and the Christian Women’s Fellowship of that church.  In addition, George and Alice were members of the First Christian Church of Kansas City. Alice enjoyed gardening, birding and was passionate about conservation and protecting the environment.  She was active in the Burroughs Audubon Society of this city and was a faithful volunteer in the organization and in Citizen Scientist birding activities such as the Christmas Bird Count and volunteering at the Burroughs Nature Center.
From 1972 to 1998, Alice and George attended 25 annual National Wildlife Federation Summit Camps spending a week at different areas of the country learning about the environment. Starting in 1983, she and George directed their energy to volunteering at Squaw Creek National Wildlife Refuge where they earned the award of Volunteer of the Year several times.  This wildlife wetland became dear to their hearts. Alice was a lifetime member of the Friends of Squaw Creek National Wildlife Refuge and the National Wildlife Federation.
She was also a member of the Self-Help for the Hard of Hearing and she studied lip reading with the help of her granddaughter Betsy.
A memorial service will be held October 16, 2016 at 3:30 p.m. with visitation starting at 3:00 p.m. at the Raytown Christian Church, 6108 Blue Ridge Blvd., Raytown MO 64133. In lieu of flowers, Alice’s request was for memorial donations to the Friends of the Kansas City Zoo, the Raytown Christian Church or the charity of your choice.