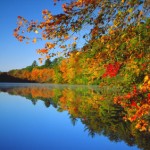 Ardell L. Stafford, 86, of Columbia passed away November 16, 2015 at Boone Landing. A memorial service will be held on Saturday, November 21st at 1pm at the Boone Landing Chapel. She was born December 21, 1928 in East Troy, Wisconsin to Lawrence and Leona (Travis) Twist. Dell received a degree in Fashion Design and Merchandising and worked in the Fashion Industry in Chicago in the 1950s. In 1956 she moved with her brother, Dean Twist, to Northern California where she met her husband, Bruce Stafford. In 1968 to 1970 Dell and Bruce followed their adventurous spirit living in the Marshall Islands and traveling through the Orient. Dell loved pre-school children and returned to college in the 1970s and received an AA degree in Child Development and became the Director of a very successful pre-school in Modesto, CA. Dell was an accomplished seamstress, cook and an avid reader. She is survived by two daughters, Carol Walsack and Christine Root, 6 grandchildren and 12 great grandchildren, 1 brother, Dean Twist, of Northern California, 2 sisters, Lois Fairchild and Nancy Koch of Wisconsin and numerous nieces and nephews. Her husband, Bruce, and 4 brothers preceded her in death.