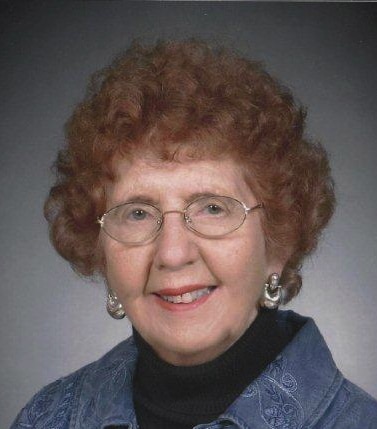 Arlene was born on February 25, 1935, in Albany, Missouri, the last child of eight to Oliver and Stella Crockett. She graduated from Albany High School in 1953, where she was a member of the cheerleading team, and she attended Northwest Missouri State. She married Roy D. Ball in 1965 and the couple was wed for 50 years.

In 1990, Arlene retired from Western Electric, Lee’s Summit, as a celebrated employee after 30 years of service. She was famously vivacious in her retirement, never losing the spirit of her younger years. Arlene and Roy were always the first feet on a dance floor and tremendous lovers of music. The couple enjoyed extensive travels within the United States and abroad, visiting Ireland, Germany, Austria, France, Italy and many Caribbean Islands. They also spent their retirement winters in Texas’ Rio Grande Valley as part of a close knit and spunky band of vacationers.

Throughout her adulthood, Arlene spent more than 40 summers with her family and friends at her and Roy’s house on The Lake of the Ozarks. Arlene had the rare ability to make these lake days feel magical: many remember being taught to water ski by Arlene, boating with the couple, home cooked meals, and Arlene’s endless liveliness, warmth, and love.

Arlene is preceded in death by her parents, brother, Eldon, sister, Velma, nephew, Vince, three sisters in-law, and two brothers in-law. She is survived by her husband, Roy Ball, of the home, daughters Cynthia Viles Ebbert (Bryan), Catherine Viles Brattin (Kenneth), Julie Ball Lacy (Ron) and Laurie Ball Steffee (Sean). She is also survived by her grandchildren, to whom she was a doting grandmother: Kelsey Rae and Mitchell Brattin, Lucas and Evan Youngblood, Eric and Jessie Steffee, Amy Chrisjohn, and Christopher Grindinger, as well as five siblings, two great grandchildren and numerous nieces and nephews.

A celebration of her life will be held on Sunday, May 3rd, 2015, at the Lake Lotawana Community United Methodist Church, 28901 NE Colbern Rd, Lee’s Summit, MO, at 2:00pm, with the visitation occurring one hour prior.

The family would additionally like to express much gratitude to the staff of Season’s Care Center and Groves Community Hospice for their compassion.

In lieu of flowers, the family requests donations to be made in honor of Arlene to the church or Groves Community Hospice, 15600 Woods Chapel Road, Kansas City, MO., 64139.