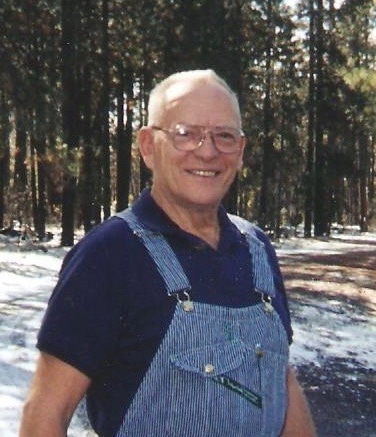 Aubrey Ray “Bob” Bryant, 82, of Odessa, MO went home to the Lord, surrounded by family, on February 16, 2016 at the Rehabilitation Center of Independence following a nearly four year struggle with Alzheimer’s disease.

Bob was born on September 23, 1933 to Roy and Nettie Kysar Bryant in Doniphan, MO. He and his twin sister, Audrey Faye, were two of 10 children raised on a farm in Mexico, MO. Bob loved to tell stories of his childhood on the farm and of his school days. He graduated from Auxvasse High School in 1951.

Following his graduation, Bob joined the U.S. Army and served a two year tour in Germany. Upon return from his time in the service, he moved to Kansas City, MO where many of his older brothers lived and worked. There he met and married Shirley Morrison and they had two children, Melinda Bryant (Johnson) and Robert Ray Bryant

Bob, a retired carpet layer, was an exceptionally hard worker. Most people go to the lake to rest and relax, but Bob found his relaxation at the lake working, mowing, helping to build three houses, and building a retaining wall that was referred to by family and friends as “the great wall of the Ozarks”. He was always willing to help on any type of projects needing to be tackled. He loved to hunt, fish, and enjoyed fun of all kinds with his family. Most of all, Bob loved the Lord and was actively involved in the church. Along with all of his work, he found time to help with the construction of the church building of Noland Road Assembly of God, where he faithfully served as a deacon and delighted in working in many capacities within the church. He faithfully served alongside Rev. Bill Cambers and Rev. Jim Foster during their pastoral ministries.

Bob’s wife, Shirley Bryant, preceded him in death after thirty-nine years of marriage.  Bob then met and married Glenda Hoezel , and became stepfather to James Hoezel and Brenda (Hoezel) Allen. He enjoyed a retirement of continuing to serve in the church, mowing and spending time with his children and grandchildren.

On Saturday, February 27, 2016, a visitation will be held at 10:00 am followed by a memorial service at 12:00 at First Baptist Church of Odessa, 100 State Hwy OO, Odessa MO 64076, and a graveside service will be held at Miller Memorial Gardens at a later date. Flowers accepted or contributions may be made in his honor to Avenue Family Church, 522 Jackson Avenue, Kansas City, MO 64124 which is pastored by his son, Pastor Bobby Bryant.