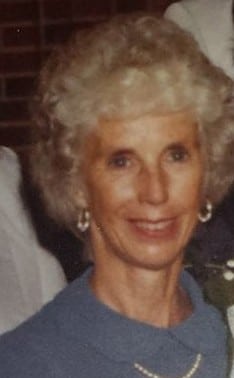 Babs Tuley, 88, of Leawood, Kansas passed away on June 24, 2014.   She was born May 4, 1926 in Denver, Colorado to Andrew and Marietta Chase.   A tomboy, oldest of four, she was a “big brother” to her siblings Blaine, Wendell and Ron.   After attending Beaver College in Pennsylvania she went to work as a stewardess for TWA where she met veteran World War II pilot, Bud Tuley.  Babs and Bud married June 19, 1947 and enjoyed 49 years together until his death in 1996.  They raised four sons and Babs was a surrogate mother to many of their friends.  Her home was always open; Bud never knew how many people would appear at the dinner table. Babs and Bud honeymooned at the Lake of the Ozarks and eventually built their own cabin there in the mid 50’s; here the family made many happy memories boating, fishing, and swimming. Babs was an independent woman, never daunted by tackling any project. She loved travel and visited many countries the world over.  She obtained her pilot’s license and she and Bud flew their own airplane all over the U.S.A.  She also participated in several Powder Puff Derbies. As her older sons approached college age, Babs got her realtor’s license and became a successful realtor with a career spanning more than 50 years.  At one point she opened her own company Tuley Rowan.  She finished her career with J.D. Reece. Babs was a member of Colonial Presbyterian Church, Clipped Wings, the Ninty-Niners, D.A.R. and many other organizations.  She is survived by her four sons, Bill (Sharon), Jim (Laurie), Collins (Debbie) and Tom (Tina), ten grandchildren, four great grandchildren and two brothers, Blaine (Lorraine) and Ron (Georgia). Babs touched many lives and will be greatly missed.  Her family invites her friends to join them in a celebration of her life, Sunday, July 13, 2014 between 1 and 4 p.m. at Babs’ home.  Feel free to contact one of her sons if you need more information.   Donations may be made to Kansas City Hospice.