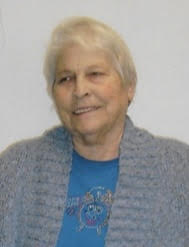 Barbara Jane Rossiter, of Raytown, Mo passed away December 1, 2021, at age 87. Mrs. Rossiter was born in Hagerman, New Mexico. Barbara married Harold Rossiter in 1951. While Harold was serving in the U.S. Navy, the first child Barbara Jane was born in 1952, soon followed by Valera “Toy” in 1954. After taking a short break Harold Raymond came into the world in 1957. James Edmund being the little tag along arrived in 1961. At this time, they had moved to the Raytown Mo. area and Harold began working at the Bendix corporation while Barbara was tending to her flock of child demons. While the kids were growing up, she would ensure they were in clothes, fed, and loved. When the kids were getting older, she took a job at the Sears and Roebuck company for extra money so that she could spoil them with all her might. Both the boys and girls were into sports, and she often was busy running them to their practices and games, washing dirty uniforms, and yelling for them as well as unwillingly donating her body for tackling practice. She was a big sports fan. When the kids were getting married and graduating from high school, she would find opportunities to work at places like the Kansas City Royals and run lab medicines and equipment around the Kansas City area.  Barbara and Harold moved to the Lone Jack, Mo. area and started to be mini farmers, raising chickens, cows, pigs and even had a few horses. They enjoyed this life and while staying busy with this activity, they also had another endeavor, spoiling the grandchildren and grandma Barb was good at it. After a few years Harold retired, and they then moved to the Lake of the Ozarks. Now the grandchildren all wanted to go to their house and live the lake life. Also, at this time Barbara and Harold became world travelers going to Korea, Germany, Italy and many more European countries often using Jim and Yong Hui as tour guides.  Not one to give up on the USA, they became snowbirds and went to Texas many years and met many fine people. While living this life she became a member of the Rebeca club, VFW, Eastern Star and a member of T.O.P.S. After many years of lake life, they moved into Warsaw Mo where Barbara continued her activities as well as starting many others such as a weekly hen meeting where her and some cohorts would play cards and I’m sure told a few stories which may or may not have been fully accurate. After Harold’s passing, she would split time between Warsaw and Raytown until she became a full-time resident of Raytown. While living in Raytown she met many wonderful people and made new friends. Not to give up her likeness of traveling, along with her sisters and good friends she went to places like Australia, Nova Scotia, Alaska, Arizona.