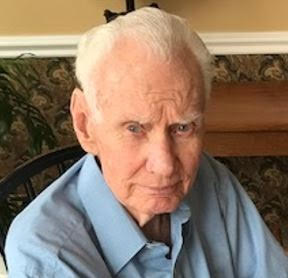 Ben attended Manual High School and began working at the Forum Cafeteria at a young age. The Forum Cafeteria is where he met lifelong friends (Joyce and Jackie Evans) and of course, the love of his life, Louise Horn, whom he married in 1949.

In 1951, Ben enlisted to serve in the Air Force and was stationed at Sheppard Air Force Base in Wichita Falls, Texas.  During these years Ben and Louise welcomed their only daughter,Denise Lou (Williams) Cooper.

After being honorably discharged as a Staff Sergeant, Ben and Louise traveled back to Kansas City, MO.  Ben returned to Forum Cafeteria and was promoted to management. In 1957, Ben and Louise picked out a lot in Claycomo, MO and Ben along with friends and family began building their forever home.

Ben’s second career was in sales for Manor Bakery and in 1985 he retired to be a full time Grandpa to  Brian and Aaron.  His most treasured memories were taking “the boys” to the lake, playing golf, boat rides, and fishing.

Ben was an avid golfer and won several golf tournaments. He loved all sports and would tell stories about being at the 1946 Boston-Cardinals World Series game where he saw the famous Enos Slaughter score from first base.  In 1948 he attended the University of Missouri football game where the Tigers beat undefeated SMU!

Deer Valley Park at Lake of the Ozarks was a large part of Ben and Louise’s life together and where many world problems were solved around the nightly campfire. Retirement winters were spent traveling to the warmer Southern and West Coast climates.

Ben is survived by his daughter Denise Lou (Chris) and grandson (Aaron Benjamin).  He was preceded in death by his wife Louise and grandson Brian Christopher.