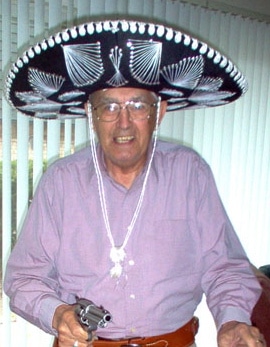 BOBBY GENE FORD
5/31/1927 – 3/26/2012
Bobby was a loving husband, father, grandfather and friend.  As a Navy man he served in World War II on the USS Copahee—after which, he was married to Kathryn Phillips.  A marriage that extended over 52 years.  Throughout his life, Bobby NEVER met a stranger, loved riding horses, flying model airplanes and garage sales to fund his next buy, sell, trade deal.  He was known from time to time to come home with one or two vintage red suit jackets to offset his friendly personality!  He consistently spread his humor with his jokes and laughter.  From time to time, he could be heard singing a favorite tune called Love Lifted Me.  He was an absolute joy to all who were fortunate enough to know and love him.  While he joins his wife in heaven, Bobby leaves behind (but only for awhile) his two children Cheryl and Dave, six grandchildren, thirteen great grandchildren and Mildred Hardison his loving companion through his later years and her extended family.  He will be dearly missed and always in our hearts.  Funeral service and internment will be at Leavenworth National Cemetery, Leavenworth KS on Friday, March 30th at 1:30 pm.  Flower or monetary donations should be sent to a Heart Foundation of choice in his name