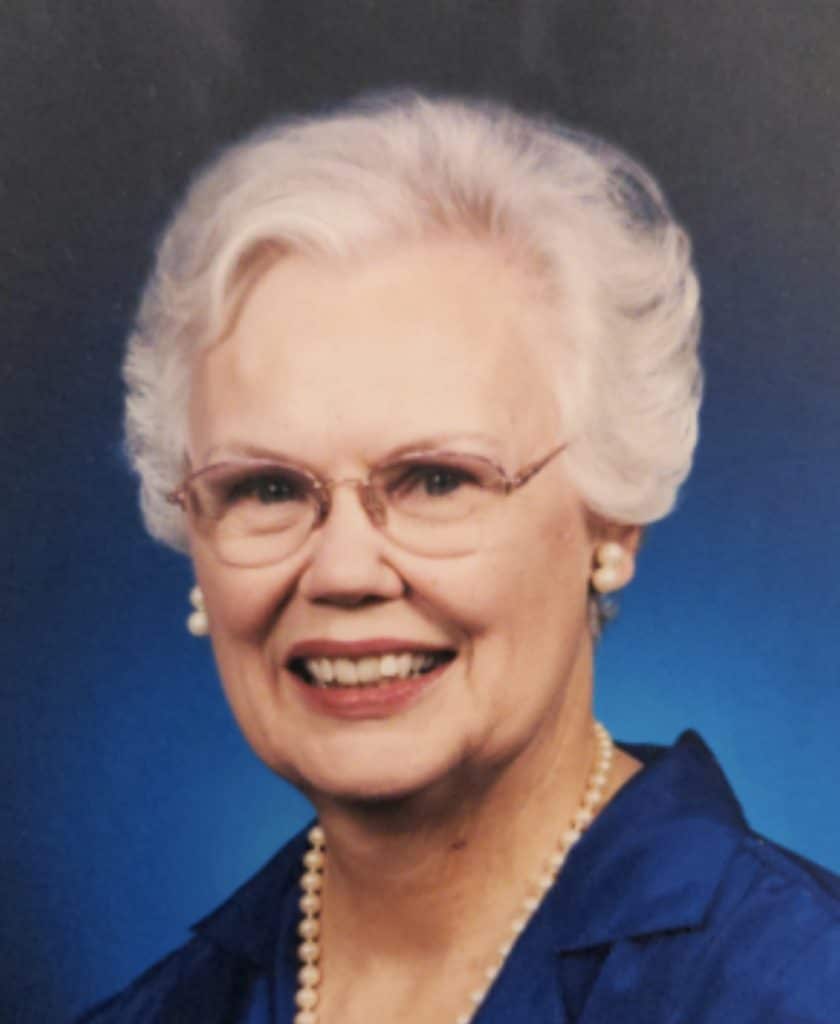 Bonnie Lee Frazier, 90, of Raymore, Missouri passed away peacefully on February 2, 2022. Bonnie was born on April 4, 1931 in Quincy, Illinois to Lura and Arthur Richmond. She was married to Eugene N. Frazier on December 26, 1948. Five children blessed their marriage: Suzie and Cindy (Steve Summers), Ohkay Owingeh, NM; Jamie (Judy), Overland Park, KS; Jeff, Suwanee, GA; and Joy (Kelly Dwyer), Olathe, KS. Gene and Bonnie have 15 grandchildren, 14 great grandchildren and many nieces and nephews. Preceding her in death were her husband, parents, two brothers and one sister and their spouses.

Bonnie was involved in many areas of the church throughout her life. Before their marriage, Gene and Bonnie stepped into the “inner circle” at young people’s conference, dedicating their lives to Christian ministry. She gave leadership to children, youth and women activities in churches where her husband was pastor in Oklahoma, Missouri and Kansas. She retired in 1993 as Resource Assistant for the Christian Church (Disciples of Christ) in Oklahoma where she traveled to the 200 Oklahoma churches with her husband, Eugene Frazier, Executive Regional Minister (1977-1993). Bonnie served several terms on the board of the St. Louis Children’s Christian Home, plus various positions in district, regional and general manifestations of the church. She served a four-year term as President of the International Christian Women’s Fellowship, culminating in an assembly of 4,000 women in 1994. She was on the board of the National Council of Churches and was a delegate to the Seventh Assembly of the World Council of Churches, Canberra, Australia. A recipient of the Church Women United’s Valiant Woman award in Oklahoma City, she started the Mother to Mother program. Bonnie also served as President of the Belton-Raymore chapter of Church Women United.

Bonnie played numerous wind, string and keyboard musical instruments and was a former piano and pre-school teacher. She provided vibraharp, piano and organ music at many events from an early age. She said, “My music is the voice of my heart.”

Upon retirement in 1993, the Fraziers moved to Foxwood Springs Living Center, a retirement community in Raymore MO where she did much volunteering and was formerly Vice President of the Residents’ Council. She was a member of Raymore Christian Church where she served as elder, president of Disciples Women, and was involved in numerous ministries. She and Gene served faithfully, traveled extensively, led groups and witnessed the mission of the church throughout the world. They were loving, accepting, affirming and celebrated the goodness of all people, regardless of race, ethnicity, religion, social class, disability or sexual orientation.

Memorials in honor of her lifetime of service, may be made to: Phillips Theological Seminary:http://ptstulsa.edu/donate/