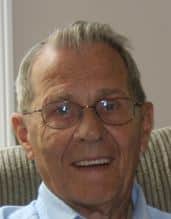 Carl grew up on a farm in Russellville, Missouri. He was drafted into the Army in 1953 where he served in Korea for two years. After his return home, he attended trade school for diesel and auto mechanics. He married Vonnie on October 25, 1959. They started a family in 1966 with Nancy and in 1968 they added Lori to the family. Carl worked at TWA from 1967-1994. He enjoyed his tractors, time in his shop, offering a helping hand to others and supporting his two girls in all their activities. Carl and Vonnie spent their later years traveling throughout the US and abroad. He also had four grandchildren that were the apples of his eye. He was known for his woodworking skills and being able to build or fix anything.

He was preceded in death by: both parents and his sister, Lydia Winkler.