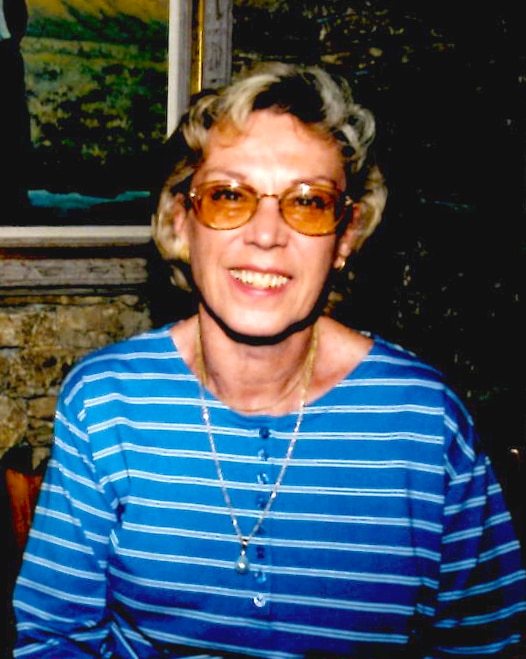 Carol Smith of Kansas City passed away of natural causes on January 21, 2021at her daughter’s home in Kansas City, MO.

Carol was born in Johnson City, TN, June 17, 1933, to Ralph Henry and Mildred Carter. The Smoky Mountains always held a special place in her heart.

Fortunately, the Depression did not affect her family financially, but she recalled that they often provided food to men who were “passing through” and needed a meal. From that experience, her dedication to help others lasted throughout her life.

A Brookside and Armour Hills resident since 1960, Carol patronized local small businesses and restaurants almost exclusively. She felt it was her civic duty to keep them afloat. She worked as an office manager, made friends easily, and her sharp mind, and quick wit led to lifelong relationships.

In 1983, Carol married Jerry Roach, a freelance artist. Born in Shawnee, OK, he worked for Hallmark Cards for many years. Jerry passed away in 2005. Her only sister, Jean Morris of Georgia, passed in 2016.

Certain “good-will” projects became annual traditions. She, Jerry, and close friends, often took special gifts to residents at a group home. She made hundreds of bags of Christmas cookies each year for children at the Metropolitan Lutheran Ministries. And she was a member of the sewing group of Country Club Christian Church whose talented seamstresses make baby clothes, blankets, and other necessities for mission projects.

Careful and frugal by nature, Carol practically “invented” reduce, reuse, recycle. For example, she did not accept plastic bags with purchases and brought her own to-go containers with her to restaurants.

Carol and Jerry were members of a Kansas City group of commercial artists known as “The Art Bunch” who met as a dinner group for many years.

She loved sitting on her screened porch in Brookside with friends or waving to neighbors passing by. Sometimes she knew a dog’s name more readily than the owner’s. She took pride in an orderly yard and her grass, hedge, and flowers were always in top shape.

Carol had many talents. She made all her children’s clothes as well as her own when they were young, was an excellent baker and home decorator. Carol did upholstery and refinished antique furniture into her early 80s.

Games and puzzles of all kinds delighted her and kept her mind agile; she loved to play cards with her bridge-buddies at Woodside Country Club. Carol loved to read, especially mysteries. She was an avid sports fan, whether it was the Kansas City Royals, the Chiefs, or KU Basketball.

She will be greatly missed.

A celebration of life ceremony will be held in the spring. Contact jackie.dipasquale@gmail.com if you would like to attend.

Just think of stepping on shore and finding it heaven.

Taking hold of a hand and finding it God’s hand.

Feeling invigorated and finding it immortality.

Passing from storm and tempest to an unknown calm.

Waking up, and finding it home. 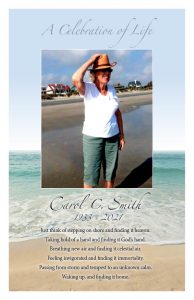