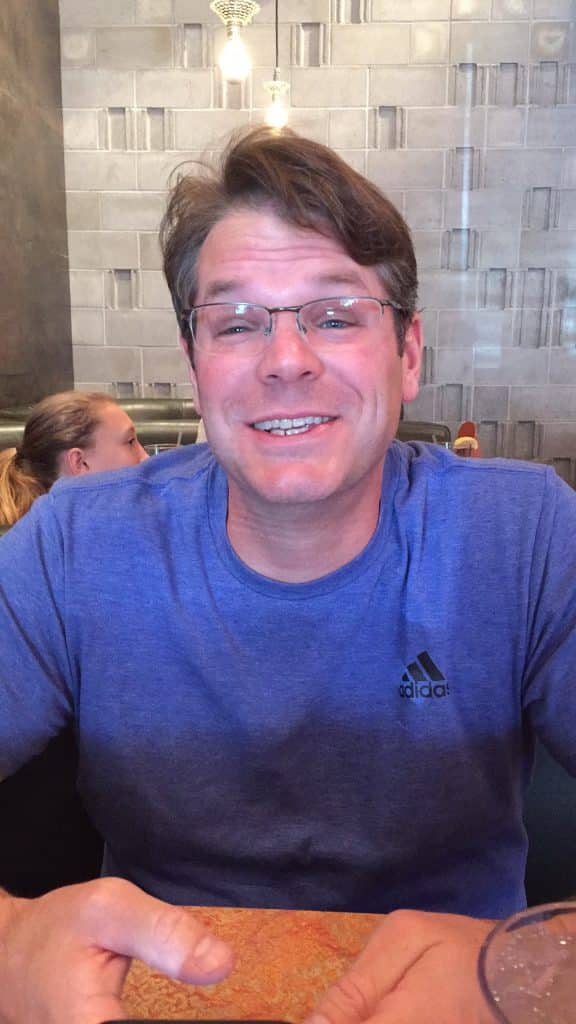 On Sunday June 19th Charles Alexander Hoffmann, Chuck as his loved ones knew him, broke hearts from coast-to-coast when he unexpectedly closed his wildly beautiful blue eyes for the last time and made his exit to the great beyond at the too young age of 44. Desperately missing his infectious chuckle and incomparable bear hugs are his beloved wife, partner, and best friend Ginger, his daughter Britt and son-in-law Tim, his son Nick, and his multiple canine babies Maxwell, Madison, and Chloe. Also mourning Chuck are his adoring parents Gerry and Marie, his big brother Erik and sister-in-law Jessica, his mother and father-in-law Dave and Pam Ireland, bother-in-law Jack and sister-in-law Kristy, brother-in-law Kevin, his niece and nephews, his many scruffy grand dogs and grand cats (who are lost without the extra treats he constantly snuck them), and many, many friends and coworkers.

As hard as it is to believe there was once a time that Chuck wasn’t over 6 ft tall, where he had to push his chair to the counter so he could climb up and get his cup from the cabinet, stuffed Garfield doll and Calvin and Hobbes comic books often in tow. That can do attitude that 2-year-old Chuck had never wavered, not even when the security guard at TWA, where Marie worked, had to fish him out of an indoor fountain after 10-year-old Chuck had driven (read: crashed) his remote control car and decided to jump in after it. Chucks initiative drove him to try all kinds of sports and instruments throughout his school days including baseball, skateboarding, track, mountain biking, viola, guitar, saxophone, and perhaps his most widely shared throwback photographs, yell leading.

After graduating from Park Hill High School in 1996 Chuck went on to the University of Nebraska and eventually the University of Kansas where he competed as a yell leader. Summers in college were spent traveling with his cheer squad training and coaching high school teams, where we can all be sure he left a path of admirers in his wake. Chuck made friends easily and kept them for a lifetime, an entirely too short lifetime; but how lucky we were to have seen his smile and laughed at his jokes at all. In 2004 Chuck graduated from the University of Kansas with a Bachelors of Science in Economics and made his way home to Kansas City.

If there was one word that every person who knew Chuck would use to describe him it would be kind. It was his kind heart, calming presence, and uncanny timing for telling a joke right after she took a sip of a drink that brought Chuck and his wife Ginger together in the beginning. Kansas Citians at heart, the pair spent time together at Worlds of Fun riding roller coasters, attending Royals games rain or shine, and nearly turning into popsicles watching the Chiefs play in the middle of winter.

Chuck was the missing piece of the puzzle, the light in the storm, the brush stroke that completes the painting when he stepped in and became a dad to a teenage girl (yikes – did we mention he was brave?) and an adolescent boy. He jumped right into the throws of parenting: reading every single Harry Potter book with Nick, painting bedroom walls the brightest, blinding neon pink for Britt, educating them both in the ways of science fiction movies and how to make tacos, pizza, and pasta…all the most nutritional meals of course. He gave all the best advice, wiped all the tears, and lets be honest, put up with a whole lot of teenage hormones with absolute grace. So meals be damned, he was in fact, the best dad of all time.

After both his kids were out of the house Chuck and Ginger built a new home in Pleasant Hill, Missouri with a giant yard for their many dogs to roam and where they could see the sunset for miles…or storm watch, he was a Missourian after all. Chuck and Ginger celebrated 10 years of marriage in November 2021 although we all knew they were due for at least 100 more.

Chuck spent the last 10 years of his life working for Intouch Solutions as a Principal Web Developer where he assisted in the creation of web based content for large pharmaceutical companies. Chuck was generous with his time and worked hard…probably too hard it would seem in retrospect but he enjoyed creating work he was proud of and helping others in the process.

When others needed him, Chuck was never far. Whether he was helping his parents Gerry and Marie install a garden box, building a wedding cake stand from scratch for Britt and Tim, nursing Ginger back to health after emergency open heart surgery, or a million other little things in between. A task that seemed unapproachable to many was just a puzzle for him to solve. Chuck was generous with his time and gave his all to his family, friends, and coworkers. He knew exactly how to care for his people, ending his calls with “love you” every time.

We would be remiss to not mention Chucks incredible super power for knowing when someone needed a hug. Oh what we would give for one more!