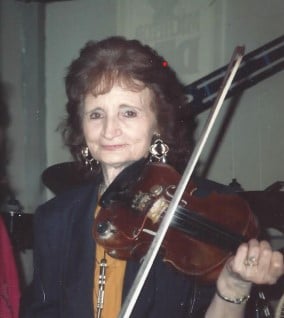 Christine Johnson passed away September 28,2021 at the age of 93.
Christine was born September 22, 1928 to Dave and Grace Livingston.
She grew up in Rebecca, Georgia attending Salem Baptist Church along
with her mom and nine brothers and sisters where her father Dave would
preach and the children would play musical instruments that he taught
them to play. In Cordele, Georgia they were on Radio Station WMJM for
many years. During the 1950’s Buddy Livingston and the Girls had one
of the first Local TV Programs on WTOC, Savannah, Georgia. She gave up
many opportunities and set her fiddle aside for many years to raise
her four children. She did pick it up again later for many years.
Christine loved playing her fiddle.