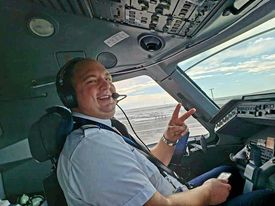 David Scott Meyer, 40, of Columbia, died December 8, 2020 unexpectedly at his home following a recent diagnosis of a brain tumor. He was born David Scott Mueller on February 10, 1980 in St. Louis, Missouri to Val (Pankow) and the late Harlan Mueller. He lived in Otis, Kansas for three years then moved with his family to Columbia, Missouri. He graduated from Hickman High School and Central Missouri State University in Warrensburg with a degree in Aviation.

David enjoyed hunting, fishing and scuba diving, but his passion was flying. He was the Flight Instructor at Central Missouri Aviation in Columbia to build flying hours. David then flew for Trans State Airlines, a regional airline for United, as a First Officer and then later as a Captain until February 2020 when the airline closed. He was then a Corporate Pilot for First Class Air Services until his passing. As expressed by his sister Rachel, “He just really loved to fly!”

He is preceded in death by his father, Harlan Mueller; grandparents, Walt and Corrine Pankow, Jerry Mueller and Don and Doris Meyer; uncle Rick Pankow and aunt Karen Mueller.

David is survived by his parents, Val and Rick Meyer; sisters Rachel (Benny) Bennison and Crystal (Matt) Arellano; brother Chris (Molly) Meyer; nephews and nieces: Andrew, Alex and Austin Bennison, Ian, Tucker and Willow Arellano and Theo, Harrison and Eloise Meyer; grandparent Lillian Mueller and many aunts, uncles and cousins. He will also be missed by many friends at Southside Pizza and Sub and The Tap House.

As per his wishes, cremation has taken place. A Celebration of Life service will be held at a later date due to COVID-19.