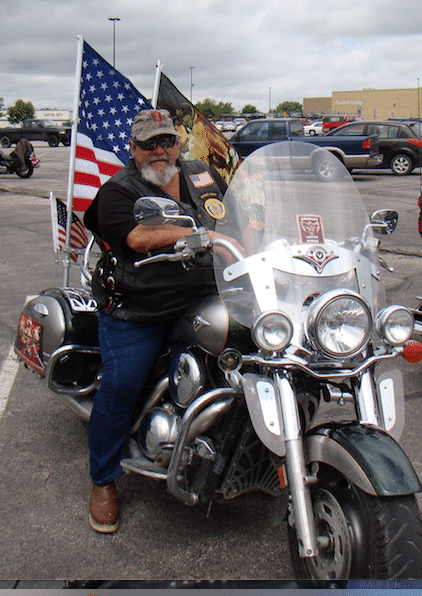 Donald Dean Hawkins, 60, Osawatomie, Kansas passed away Friday, April 15, 2016 surrounded by loved ones.  Funeral services will be held at 10 AM on Sunday, May 1, 2016 at the American Legion Hall in Paola KS.

Donald, formerly of Visalia CA, was born on July 29, 1955, a twin son of Jerry and Donna Hawkins (surviving of Visalia, CA).  Donald attended Mount Whitney High School of Visalia CA.  He enlisted in the US army on January 9, 1974 alongside his twin brother Ronald.  Donald spent his young adult years as a concrete finisher and truck driver in California.  In 2000 his family moved to Kansas where Donald worked for KDOT for 9 years.  He was a proud member of the American Legion Riders Chapter 156 where he proudly once again served and flew the United States flag.  Donald never knew a stranger as he would talk anyone’s ear off who would listen.  One of his favorite topics was to discuss his American Indian heritage.  In his final days he talked about being excited for summer so that he could get back on his motorcycle, take the boat out to the lake and watch the Bowers brother’s dirt track race.

Donald met Donna K. Boggs cruising Mooney Blvd in Visalia CA in 1972.  They were married 1 short year later on December 24, 1973.  She survives of the home in Osawatomie, KS.  They had two children together who also survive, daughter Kresta (Kelly Plank) Hawkins of Gettysburg, PA, son Justin (Anna) Hawkins of Burlingame, KS and grandsons Ethan Hawkins and Levi Plank.  Also surviving is his sister Karen (Tom) McCormick of Visalia, CA and many in-laws, cousins, nieces, nephews and numerous “kids” who called him dad.  He was preceded in death by his twin brother Ronald Hawkins and his brother Jerrylen Hawkins.