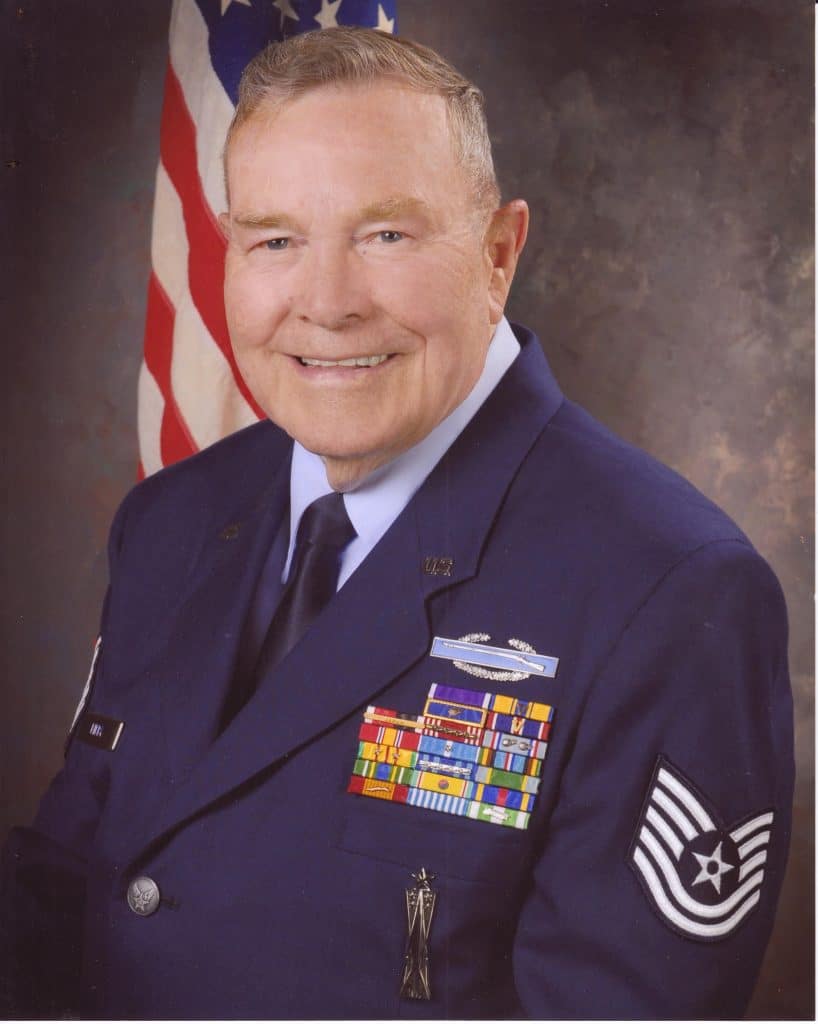 Technical Sergeant Donald Martin Kirby, U.S. Air Force (Ret.), 89, of Blue Springs, Missouri, passed away on August 16, 2018, at Autumn Leaves in Lee’s Summit, Missouri, with his daughters and granddaughter by his side.

At age 18, Don joined the Merchant Marines and received training from the Coast Guard in San Francisco. A year later, in 1947, he began serving in the Oklahoma National Guard and concurrently the Army National Guard. He then enlisted in the U.S. Army and was assigned to the 45th Infantry Division, Company A, 120th Combat Engineer Battalion. He served in the Korean War and received the Purple Heart, a Combat Infantry Badge, the Army Occupation Medal (Japan), the Korean Service Medal with Bonze Campaign Star, a UN Service Medal, a National Defense Service Medal, and the Good Conduct Medal. He was stationed in Japan before he was discharged from the Army in 1952.

He enjoyed his time in the service and decided to re-enlist, but this time with the U.S. Air Force. He was sent to radar training school and received instruction and worked with bombing, navigational and electronic systems, and missile electronics.

He met Flossie “Kathryn” Wilson while stationed in Arkansas, and they married in 1957. They traveled the world while he was in the Air Force. Overseas they were stationed in England and Germany. They adopted their daughters, Donna (Kirby) Vanderhoef, of Blue Springs, Missouri, and Denise Kirby, of Kansas City, Missouri, at birth. Don then served in the Vietnam War. He retired from the Air Force in 1975, after having earned the Air Force Good Conduct Medal with three Oak Leaf Clusters, Air Force Longevity Service Award with four Oak Leaf Clusters, and an Air Force Expeditionary Medal, among other medals.

After he retired, Don moved with Kathryn and their girls to Excelsior Springs, Missouri. He worked at Allied-Signal until he retired in 1994. Don was very active in the Community of Christ Church and served as an Elder. In 1987, his granddaughter, Brittany Clemons, of Kansas City, Missouri, was born, which was one of the great highlights of his life. She was his little buddy, and they had a very special relationship.

He was very proud of his daughters, and he told everyone he met about them. “Donna is a nurse anes…anesss…anesssthetist and Denise is an attorney.” He lost Kathryn in 2000, after 43 years of marriage. By 2003, he found love again, having met Lillian Bayless while at church. He lost Lillian in 2017. His marriage to Lillian brought him the joy of a second family. He loved her children and grandchildren as his own, and they survive him:

His marriage to Lillian also gave him 17 grandchildren. Don and Lillian loved providing care for their local grandchildren, Lindsey and Kelly Gard, and Nathan, Harrison, and Renee Bruch, and he loved them dearly.

He is also survived by his sister, Roberta Joan (Kirby) Wright, of Broken Arrow, Oklahoma as well as many nieces and nephews, and Genesis.

Services will be held on August 23, 2018, which would have been Don’s 90th birthday. Visitation will begin at 10:00 a.m., at the Community of Christ Mission Woods Congregation, 2800 NW Duncan Road, Blue Springs, Missouri, 64015. The service will follow at 11:00 a.m. Lunch will be provided at the church at noon, with military honors following at 3:00 p.m. at the V.A. Cemetery in Higginsville, Missouri.