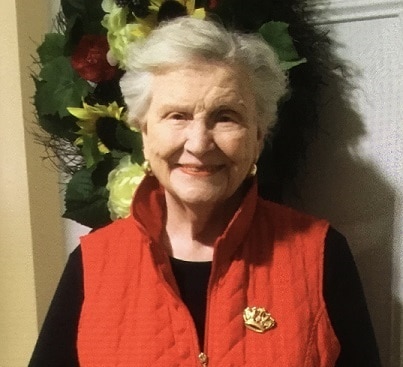 March 16, 1926 – October 26, 2021
Kansas City, Missouri – Dorothy was born on March 16, 1926, to Melvin and Velma Politte in Kirkwood, Missouri. Dorothy was one of seven children, and was preceded in death by her parents; Robert Wright, her first husband and father of their children in 1972; and her son, Michael Wright in 1996. Dorothy was also preceded by four of her siblings; Rita Marie Politte – age 1, Vincent L. Politte – age 19 during World War II, brother Francis E. Politte, and sister Theresa Politte Eberth in 2007.
Dorothy is survived by brother Leo L. Polittle (Nadine) of Oklahoma City; Phillip B. Polittle of Roseberg, Oregon; daughter Barbara Nelson of Clearwater, Florida, and three grandchildren; Jennifer Nelson of Columbus, Ohio, Zwan Preston of Honolulu, Hawaii, and Robert Wright (Brooke) of Wasilla, Alaska. Robert and Brooke recently celebrated the birth of Dorothy’s first great-grandchild, Bobby. Survivors also include a beloved daughter-in-law, Nancy Wright Stetts (Ard) of Wasilla, Alaska, and numerous nieces and nephews.
Dorothy attended primary and secondary school in Leavenworth, Kansas, and nursing school at St. Mary’s College and St. John’s Hospital, also in Leavenworth. Dorothy’s first employment was as an RN at Children’s Mercy Hospital in Kansas City, Missouri, followed by work at the American Red Cross where she worked to help subdue the polio epidemic in Texas during 1948.
Dorothy’s longest tenure was with the Hickman Mills, Missouri School District, at which time she also worked part time at the Hickman Mills Family Clinic.
During the summer months, Dorothy found time to volunteer on medical missions to the Dominican Republic, and to the Honduras, which she did after attending language emersion school in Merida, Mexico in order to become more fluent in Spanish. Dorothy retired from Ruskin High School in 1989 after serving her students there for 31years.
In January of 1990, Dorothy met Geral E. Culp, who had recently retired from UMKC, at which time they bonded. Dorothy and Geral were married in 1994, and spent several happy years together traveling extensively in the United States and abroad. Both were active members of All Souls Unitarian Church. After finding each other, Dorothy and Geral spent their lives together with shared values and gratitude. Geral preceded Dorothy in death during August of 2016.
The survivors of Dorothy’s second family are Geral’s son Allan Culp (Cathy), daughter Ronda Culp McCrary (Kevin), grandchildren Chris Nichols (Akiko), Brenden Culp, Bailey McCrary, and Chloe McCrary.
In lieu of flowers, donations can be made to All Souls Unitarian Church for the Music or Religious Education Departments, or to Planned Parenthood.
A celebration of Dorothy’s life will take place at All Souls Unitarian Church, Kansas City, Missouri, (816) 531-2131, on November 14, 2021. Because of Covid-19 this service will be Private.