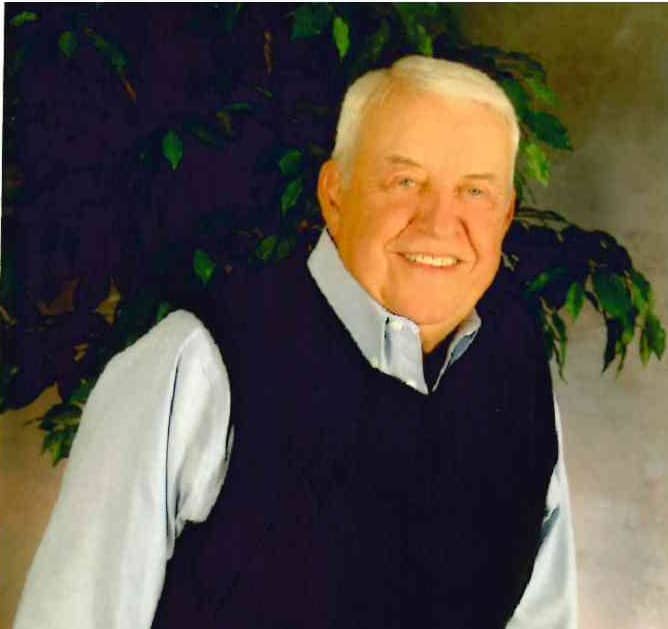 Eldon Gene Wenger, resident of Mission, Kansas passed away January 6, 2016 in the presence of his loving sons. Eldon was born August 4, 1933 in Powhattan, Kansas to Gottlieb and Anna Finger Wenger. Eldon graduated from Hiawatha High in 1952. He began 12 years of service in the Kansas National Guard in 1951. Eldon moved to Kansas City in 1953 and began working for Hallmark Cards, which started a 39-year tenure. In 1954 he married Elizabeth Ann (Betty) Dawson, also of Hiawatha, and they moved to Mission in 1955, where he would reside in until his passing. Eldon and Betty were blessed with their children, Vicki, Vince, and Randy. Eldon served his community as a volunteer at Asbury Methodist Church, Cub Scout Leader, YMCA Football, Basketball and Baseball coach and volunteer for the Tom Watson Children’s Mercy Golf Classic. He enjoyed league golf, was a 40- year season ticket holder with the Chiefs and passionately followed Kansas Jayhawk Basketball. Following his retirement in 1992 he enjoyed his winter home and golf buddies in Brownsville, Texas. He loved helping family, friends, and neighbors with home and auto repair projects, spending time with his grandchildren, helping out with all three of his children’s homes, while attending as many sporting events as possible. Eldon enjoyed a zest for life that was unique and infectious, valuing time with family and his many friends above all else. He had a big heart and a bigger laugh and was always ready to help those in need of a lift in life. Eldon is survived by his sons Vince and Randy (Julie); grandchildren Stefanie Smith (Andy), Dylan Crandall, Jake Crandall and Lily Wenger; brother Lester Wenger and sister Opal Kletchka. We would like to thank the excellent, caring staff of The Forum in Overland Park for the love and care they provided Eldon during his final 13 months. In lieu of flowers, kindly consider a donation to PurpleStride KC, Pancreatic Cancer Action Network in honor of Victoria Wenger Crandall, who took a part of Eldon with her when we lost her in 2011. God speed, Speed. A Celebration of Life will be held at Asbury Methodist Church on Saturday, January 16, 2016 at 12:00 PM.