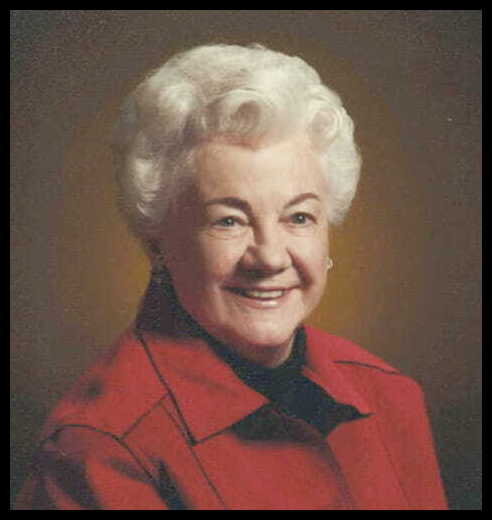 Elizabeth Lou Bouchelle was born October 11, 1927 in Chicago IL, the only child of her parents who were married almost 19 years when she arrived to bless them. She was immediately called Betty Lou, being named for her paternal grandmother who lived in the same home. Betty Lou was in the 3rd grade when her grandmother died; from then on Betty Lou decided to drop the LOU from her name to become her own person, Betty. Betty graduated 13th in her high school class of over 1700 in June 1945. Betty did not aspire to go away from home to college, so attended some night classes at Chicago’s Wright Jr. College and worked to help pay off the mortgage taken out on the family home during times of her grandparents’ illnesses.

Betty met husband Carl at a community dance that neither wanted to attend on a rainy evening in Nov. 1945, but each were coaxed by their individual friends. Their story of romance and dating is very interesting; they were married in March of 1948 at Maywood Methodist Church where Carl’s cousin’s husband served as pastor. To that union two children were welcomed into the world and raised to be followers of Christ: Nancy in 1948 and Carl in 1952.

Having always shared her married home with either her parents or Carl’s mother, Betty was able to bring joy and unity to all. She started serving in Girl Scouts when Nancy was in the second grade and made that a volunteer career opportunity throughout her life, influencing many women to become all they desired in a day when women were usually only in the home. In February 1981, at the age of 54, Betty earned her bachelor’s degree in Management & Organizational Development from DePaul University’s College of New Learning in Chicago. Betty’s work in the business world started as a bookkeeper for Patton Tractor Co. and later in life as a placement manager for Stivers Temporary Personnel Services. Betty continued as a national GS volunteer trainer, edited the newsletter for the local Garden Club and was a very active member/leader in her United Methodist Church. She also cared for husband Carl who struggled with Parkinson’s Disease for 35 years before his death in Jan. 2008.

In April 2006, at Nancy’s insistence, Betty and Carl left Bensenville and moved to Columbia MO on the Lenoir Campus. Betty was a resident there until Sept 1, 2020 when Covid isolation restrictions caused enough decline to necessitate skilled nursing care. She died peacefully in Nancy’s arms six days after her 93rd birthday. Betty has left two children, five grandchildren/spouses, and seven great grandchildren to rejoice in her legacy.