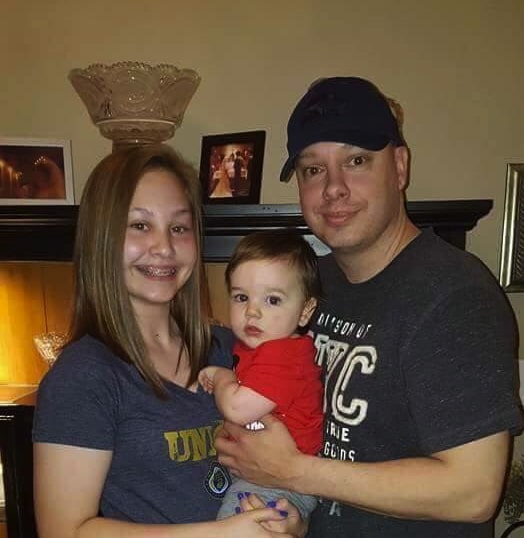 Eric Michael Hazeldine, 41, of Olathe, Kansas, died on Thursday, April 27th, 2017, in the home he shared with his family, Alexandria Doty and Jackson Hazeldine (2). The memorial service to celebrate Eric’s life will take place Thursday, May 4th, 2017 at St Thomas Episcopal church at 122nd and Antioch in Overland Park. Visitation will begin at 5:30pm and the Memorial Service will begin at 6pm, followed by a reception. Everyone is welcome.
Eric was born November 3rd, 1975, in Springfield, Massachusetts, and graduated from Windham High school. He proudly served in the United States Navy for six years where he met many great friends. Eric held many job titles after being honorably discharged from the Navy. His last position was as an Armed Security Guard. A position that allowed him to care for his son, Jackson, during the afternoons. Eric was meticulous and hardworking, he devoted himself completely to whatever his current job was. In the past Eric had enjoyed being on a bowling league and a softball league. Eric’s passion has always been gaming, it was something that gave him much joy. Eric’s children meant everything to him. He was always there to care for their basic needs. In his last moments, he was only thinking of his children.
Survivors include his children, Hannah Hazeldine (15) and Jackson Hazeldine (2). his significant other of 4 years, Alexandria Doty, his mother, Nicole Gruver, his father, Richard Hazeldine, and his two sisters, Lynda Lambert and Tracy Hansen.
We all wish we could have done something to save Eric and would give anything to still have him with us. Please take solace in the fact that he is now at peace and has finally found happiness and will continue to always watch over his children.