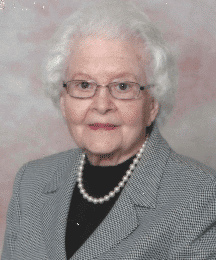 Esther Berniece (Jobst) Sherman passed away peacefully surrounded by her family on November 12, 2018 in her home at the age of 94.

Esther was born on April 11, 1924 in Merriam, Kansas to John Ludwig Jobst and Beatrice May (Blackmore) Jobst. She graduated from Wellington High School in 1942. She was united in marriage with Everett Dale Sherman on September 16, 1945, sharing life together for over 62 years. Esther was a kind and gentle mother who set about teaching her sons to have a strong faith in the Lord and encouraged them to love others. Faith was important to Esther throughout her whole life, she was a dedicated member of the RLDS Church and Buckner Restoration Branch.

Esther valued helping others and volunteered at Laurel Club for many years. During World War II, she worked at Lake City ammunition plant at as a timekeeper. Esther enjoyed a decade working as a supervisor and payroll clerk at the Jackson County Sheltered Workshop and formed meaningful relationships with the individuals she worked with. She later worked at the RLDS Social Service Center.

Esther loved regularly traveling to Battle Lake, MN, where she would enjoy the serene wildlife and nature, as well as traveling the world on TWA with Everett. Esther was artistically accomplished at scrimshaw, and was even featured in magazines for her talent.