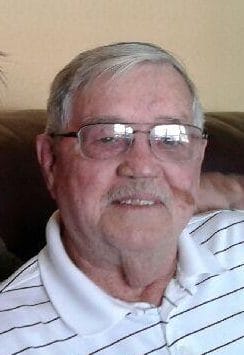 Eugene K. Yeokum, 82, passed away quietly at home on August 25, 2018. Gene was born on June 23, 1936, in Cedar County, Missouri, the 8th of nine children born to John W. and Ruby Jackson Yeokum. He was united in marriage to Bonnie Kenney on April 6, 1959.
In 1954 Gene enlisted in the U.S. Army and spent the next four years proudly serving his country. He was hired by the City of Raytown in 1965 as a laborer and worked his way to the top, serving as Director of Public Works for the last 15 years of his employment with the city. He enjoyed and was proud of his service to the citizens of Raytown and was respected by those he served.
Gene’s passion, second only to his love for family and friends, was golf. After his retirement in 2000 he was on the golf course at every opportunity. To quote him, “I play golf whenever weather permits and sometimes in spite of the weather.”
He was a loving and gentle man who will be greatly missed. Gene is survived by his wife, Bonnie, son William “Bill” Yeokum (Kelley), daughter Amy Yeokum, four grandsons Jason Yeokum, Blake Nodwell, Braedon Pemberton and Gabriel Parker, one granddaughter Jacqueline Herring, three great-grandsons Zachary Elliott, William Yeokum, Jr., and Trevin Harrison, one great-granddaughter Elizabeth Elliott, and numerous nieces and nephews who loved him. He is also survived by his one remaining sibling, Goldie Thornton of El Dorado Springs, Missouri.
Visitation will be held on September 4, 2018, at 10 a.m. at Heartland Cremation and Burial Society followed by service at 11 a.m. Interment with military honors will be at 3:00 p.m. at Alder Cemetery located east of Stockton, Missouri on Highway M.
In lieu of flowers donations may be made to Midwest Animal ResQ in Raytown or to your favorite charity.