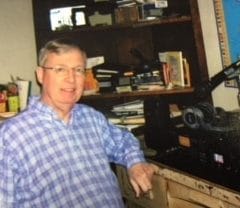 Franklin Barrett Parks, 73, Overland park, Kansas passed away December 4, 2017.  A Celebration of Life and visitation will be held at 2:00 pm-4;00pm, Friday December 29th 2017 at the Metropolitan Condominium 600 E. 8th St, Kansas City, Missouri.  Charitable donations may be made in Frank’s name to St. Luke’s Hospice House.

Franklin Barrett Parks also known as Barry was born December 31, 1943 and raised in Ottawa, Kansas. He graduated for Ottawa High School in 1962. Frank joined the Air Force and served from 1963-1967. He was a Staff Sargent and was stationed in Germany and Pakistan.  Following his return, he met and married his wife Cheryl on October 10, 1969 and they have been happily married for 48 years and have raised two children.

Frank was a radio frequency engineer who worked for multiple companies and retired from Tri-Square Communications. He was an avid HAM radio operator (ACOFP) built and designed HAM repeater systems. In his earlier years, he volunteered teaching amateur radio to students at Kansas City School of the Blind.  Frank was a big sports fan of the Kansas City Chiefs, Royals, and KU Basketball. He will be remembered as a loving husband, father, and grandfather.