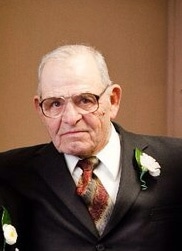 Born February 21, 1934 in Kayford, West Virginia to Laura Alice and Clay Roy Chapman. Fred went to be with our Lord on August 13, 2014. Fred is survived by his wife Rose Marie Chapman (Rogers), his children, Paul and Teresa Christopher, Bob and Leesa Hartmann, Cindy Boettcher, Fred and Melody Chapman, Jr., and Mervin and Tiffany Chapman. He was blessed with 17 grandchildren and 12 great grandchildren. He leaves behind 2 sisters and one brother.

Fred grew up in Eskdale, West Virginia where he graduated from East Bank High School. He met his sweetheart at the company store where she worked. They were married 6 months later. Fred joined the army and was deployed to Germany the day after their first child was born. After completing his term in the army, he worked in the coal mines of West Virginia. He moved his growing family west where he found employment in the uranium and silver mines in New Mexico and the copper mines in Arizona. He served in the police force for a time and as Sheriff while in New Mexico.  During this time he earned a pilot’s license and purchased a small airplane. The family moved to the Midwest in 1965 where Fred and his brother worked together in underground tunneling and construction.

He made his final family home in Kansas City, Missouri in 1970 where his wife still resides. Fred loved to tell about how his family won him to Christ through prayer and witnessing. He was saved in 1977 and began attending Open Door Baptist Church with his family soon after. He met several lifelong friends at Open Door who helped him to grow spiritually.    They enjoyed great fellowship during their many fishing and hunting trips.

To those who knew him, Fred was always a man’s man, a modern day John Wayne; his rugged character shaped by his difficult early years.   When problems presented themselves, you could count on Fred to find a solution.  He worked hard to provide for his family and taught his children a strong work ethic.

He retired from construction work in 1996 after open heart surgery. He still enjoyed and spent much time working the “farm,” hunting and fishing with friends, and enjoying his family. While attending a Promise Keepers conference with his sons, Fred expressed regret that he was too old to start serving the Lord. Fred Jr. reminded him that it’s better to be a door keeper in the house of the Lord, than to dwell in tents of wickedness…(Ps. 84:10).

In his last years, Fred served as a greeter at Open Door Baptist Church, a door keeper in the house of the Lord. His desire was for others to know his wonderful Lord. After cancer and a broken hip took away his mobility, he continued to greet members and visitors when his health allowed. It was his purpose to make sure his nurses heard the gospel. They were a captive audience taking him to church with his wheel chair. While visiting dad in his last days, Gary Zuber led one of those nurses to the Savior. Fred was in and out of consciousness at the time, but we believe he recognized what was happening. Praise the Lord for His goodness.

Dad pondered what heaven would be like. His desire was to work to please Jesus on the other side.  His favorite verse was James 1:17: “Every good and perfect gift comes from above…..”

He was self-conscious about his singing but his love for the Lord was greater than his pride and he sang out hymns from a grateful heart. He will be remembered by many as a very kind man, and by his family as a great father and provider whose last years of life trump the early years before Christ.