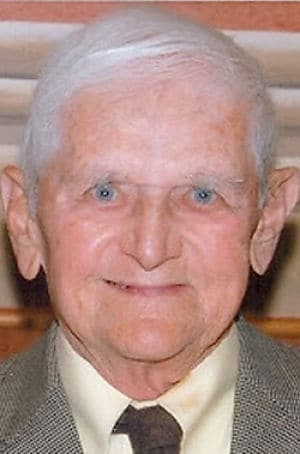 Jerry was active in school in Millinocket in sports of all types, with his favorites being baseball and basketball, where he made the all-region basketball team. He played for several years on a semi-professional baseball team in the New England states.

After his graduation from Stearns High School in Millinocket, World War II was fully underway, and he enlisted in the U.S. Navy. He served as a Bosun’s mate on an LST. He sailed extensively throughout the Pacific and remembered the Okinawa invasion. He was eventually assigned to Ft. Lauderdale, Fla., where he met his wife, Constance “Connie” Anne Shell. They were married in October 1944, and she preceded him in death.

Jerry had a long career with Sears beginning in Brookfield. Eventually he was asked to move and open stores in Decatur, Ill., and finally in Columbia. When he got the Columbia store opened, he asked to stay in Columbia because he and his family had grown to love the town.

Jerry’s interest in sports carried over to his later years, as he coached his son Tom’s little league teams in both baseball and basketball. He also dedicated many years of coaching to the church league basketball teams at First Christian Church. He and his wife were active members of the church, and he was always there to support her many church activities and help whenever he could.

Jerry’s hobbies included sporting events of all kinds. He was a big Mizzou and St. Louis Cardinals fan. He also attended many of his grandchildren’s sporting events when possible. The Guy family has a lake house near Moberly where Jerry spent many years enjoying the outdoors — fishing, boating, landscaping, etc. Jerry will be remembered by his great sense of humor and love of family.

His family plans to celebrate the lives of Jerry and Connie later this summer at their beloved Holiday Acres lake cabin.

Expressions of sympathy may be made to the First Christian Church Special Music Fund, 101 N. Tenth St., Columbia, Mo., 65201.