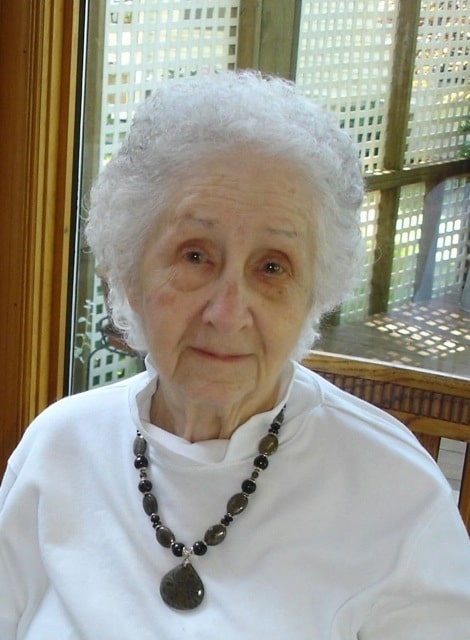 Hazel Mothershead, 99, of Lee’s Summit, MO., passed away on June 10, 2014. A private inurnment will take place at Prairie River Cemetery in Centreville, MI. A Memorial Reception will take place from 2 – 4 p.m. on Sunday, June 22, 2014, at the Lee’s Summit Historical Society Museum inside of the Train Depot, 222 S.E. Main St., Lee’s Summit, MO., 64063. Hazel’s World War II uniform and memorabilia are on display at the museum.
Hazel was born July 2, 1914, in Gibsonia, PA., to Rev. Willis and Beulah Hogg.  She graduated from high school in Geneseo, IL. She received her RN degree in 1936 from Passavant Hospital in Pittsburgh, PA., and moved to Michigan. She eventually became a nurse for Dr. Homer Stryker, who later founded the Stryker Corporation that today still produces innovative medical devices. In May 1941, while working at the University of Iowa Hospital, she enlisted in the U.S. Army Nurse Corps; she entered the Army as a 2nd Lieutenant and advanced to Captain. She was sent to Fort Leonard Wood, MO., to open a new hospital and it was there that she met Dr. Robert “Bob” Addison Mothershead, a dentist and Lieutenant Colonel in the Army, who she later married on April 6, 1950, in Fort Leavenworth, KS. In 1956, they moved to Farmington, MO., where they lived for many years with their three children: Julie, Jerry and Robert Jr. Bob and Hazel celebrated their 34th wedding anniversary before Bob’s death in 1984. In 1985, Hazel moved to Vicksburg, MI., where she enjoyed the companionship of two of her sisters and son Robert and family.  In 2000, Hazel moved to Lee’s Summit, MO., to live with her daughter Julie and family.

Hazel recalled fondly her days as the daughter of a Presbyterian minister, growing up “the middle” of five sisters and her time spent in the Army as a nurse. She also loved spending time at her family’s Barton Lake home in Vicksburg, MI. She loved to read mysteries, solve crossword puzzles, knit baby sweaters, and collect antiques. She also was known for her beautiful handwritten notes and letters. Many people called her “Mimi,” the nickname given to her by her first grandchild.

Hazel was preceded in death by: her husband; her parents; and her sisters Mary, Beulah, and Ruth. She is survived by: her sister Marion (Walter) Gillett of Kalamazoo, MI.; her children Julie (Fred) Grogan of Lee’s Summit, MO., Jerry (Patricia) Mothershead of Williamsburg, VA., and Robert (Martha) Mothershead of Falls Church, VA.; her beloved grandchildren Sarah (Aaron) Shore, Rachel (David) Roosth, Ben Mothershead, Annie Mothershead and Lizzy Mothershead; her great-granddaughter Ella Shore; and many nieces and nephews.

Arrangements by Heartland Cremation & Burial Society. In lieu of flowers, donations in memory of Hazel can be sent to the Lee’s Summit Historical Society, PO Box 835, Lee’s Summit, MO. 64063.