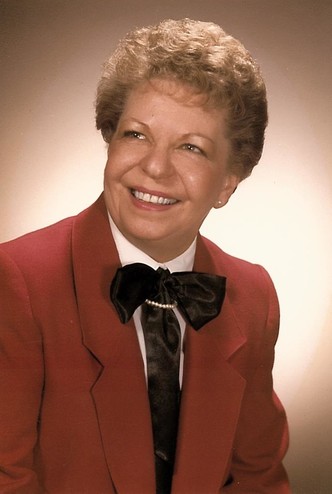 Helen (Cox) Larson, 87, of Kansas City, Missouri passed away on March 19, 2019. Ms. Larson was born on October 11, 1931 in Sioux City, Iowa to Harriett (Eberly) and Arthur “Jack” Cox. Jack worked for Lincoln Telephone and Telegraph and the family moved to Lincoln, Nebraska in 1932.

Helen graduated from Lincoln High School and moved to Des Moines, Iowa and worked for Gerber Baby Food, Urban Suburban Realty, General Growth Properties, and finally at the Iowa Wholesale Beer Distributors Association. She became the Executive Director for the Beer Wholesalers where she worked with more than 200 distributors across the state of Iowa. Helen represented them as a registered lobbyist in Washington DC, and with the Bureau of Alcohol, Tobacco and Firearms. She retired from the Beer Wholesalers in 1994. Always believing that women could do anything they wanted to, she took flying lessons in the 1950’s but never earned her pilot’s license.

Helen married Virgil Eugene Larson in 1954 in Des Moines, Iowa. She loved being a housewife and raising her kids. Unfortunately, in 1961, Polly Sue was stillborn, but resulted in Helen enrolling in a clinical trial that eventually solved the problem of pregnancies of non-compatible bloodtypes (RhoGAM). Helen divorced in 1979 and never remarried. Upon retirement in 1994, Helen moved back to Lincoln, Nebraska to be with her sister, Thelma. In 2005, she moved to Kansas City to be an active part of the lives of her grandkids.

She is predeceased by her parents, sister Thelma Viola Inbody, and her dear Polly.

Always in our hearts, GGma. Love you bunches.