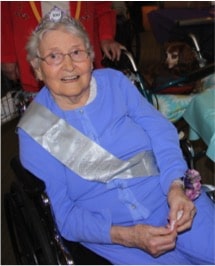 Helen Kathleen Griffin (nee Williams) of Columbia Missouri died on August 21, 2017 at the age of 100. Helen was born October 7, 1916, near Cordell, Oklahoma, the sixth of six children born to Horace King Williams and Pearl Riggins Williams. She graduated from Foss High School in Foss Oklahoma.

Helen married Harry Joe Griffin on December 12, 1951 in Dallas Texas. Harry was a naval aviator and the couple lived throughout the world until moving to Columbia in 1969 where Harry took the position of Assistant Professor of Naval Science at the University of Missouri. After moving to Columbia, Helen worked at Sinclair Research Farm, part of the University of Missouri, for over a decade as administrative assistant and retired at the age of 72. Following her retirement, Helen sang with the “Mother Singers,” played in a Columbia ukulele band, was active in the P.E.O. Sisterhood and her church. She also enjoyed traveling and learning with the Elderhostel program.

At the time of her death, Helen was a resident of the Lenoir Woods Senior Living Center. She is predeceased by her husband of 63 years and is survived by her two children, John Griffin and his wife Sherri of Callaway County, Missouri, and Janet Griffin and her husband Luke Akins, of London, Ontario, Canada.