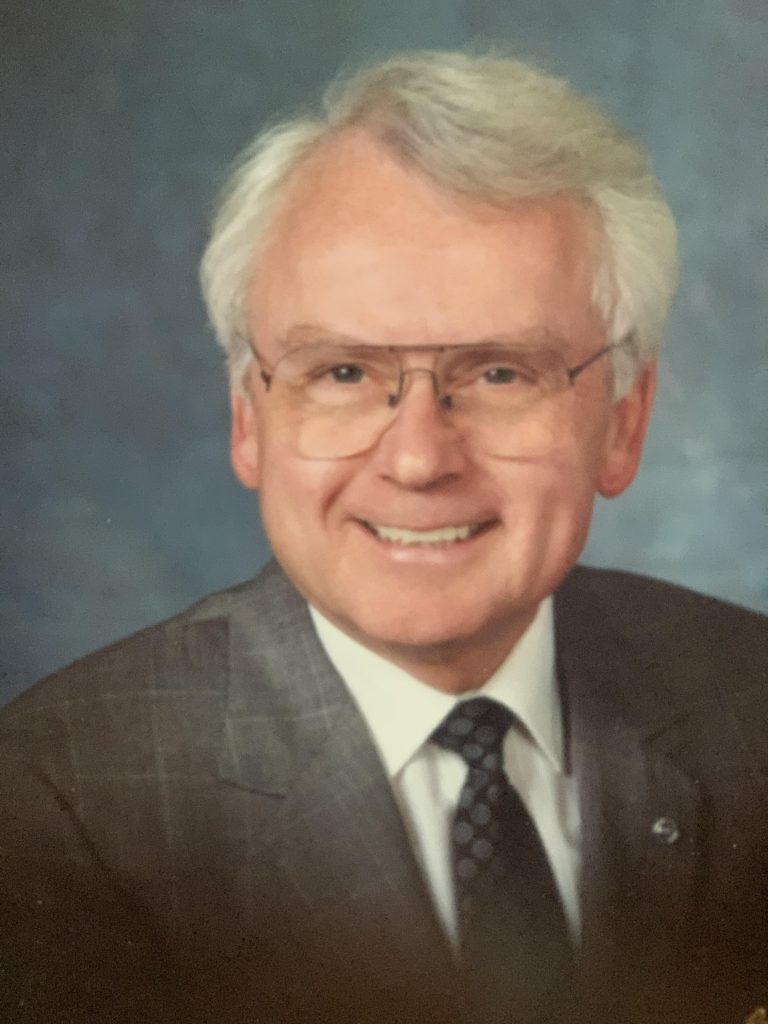 Jack Conley, 90, the first and only president of Tehachapi’s local Sierra National Bank, passed away on May 18 in Independence, Missouri. Jack was a highly engaged, civic-minded and enthusiastic resident of Tehachapi for more than 30 years. His tireless support of Tehachapi and its people made him a popular and well-respected pillar of the community.

Jack Bryan Conley was born in Council Bluffs, Iowa on June 23, 1930, the son of Miles and Eunice Conley. He married Janice Bland Conley in 1950 and they were married for 68 years until her passing on July 28, 2018. Both Jack and Janice grew up in Council Bluffs where they raised their three children.

Jack served in the US Navy and was stationed in San Diego and served aboard the USS Fort Marion LSD 22. It was at this time that Jack began a lifelong affinity for the state of California.

After the service, Jack graduated from Omaha University and the University of Virginia Graduate School of Banking.

Jack was a highly professional banker for 50 years, and he started his banking career in 1952 with North Side Bank in Omaha, Nebraska. Early on and throughout his entire professional life, Jack was a very community-oriented and service-minded person. Jack was an early proponent of an approach known today in banking as CRA Involvement (Community Reinvestment Act), providing banking services to those urban communities in Omaha. He had numerous African American churches in North Omaha as customers, and his children can remember him telling them that he had great Omaha sporting legends Bob Gibson and Gayle Sayers as customers, even before their professional success.

After North Side Bank, Jack moved on to what became known as Hawkeye Bancorp working for their bank in Council Bluffs, Iowa called State Bank & Trust. He finished his career with Hawkeye serving as president of their bank in Sioux City called Morningside State Bank.

Jack and Janice then moved to Tehachapi in 1981, where Jack was the Chairman, CEO and President of Sierra National Bank until his retirement in 2001. Sierra National Bank was a local Tehachapi bank, and Jack was in charge of the bank for its entire existence from 1981 to 2001, when it was bought by the larger Bank of the Sierra banking chain. It was at this time that Jack was able to realize the affinity for California that began long ago while serving the US Navy in San Diego.

Jack brought with him his strong Midwest work ethic and his gentlemanly manners, and he was warmly embraced by the community of Tehachapi. The Conley family in turn were great supporters of Tehachapi. Jack was was involved in so many organizations and received so many professional recognitions, there is not room to list them all.

He served as president of the Kern County Board of Trade and the Greater Tehachapi Chamber of Commerce, and was active in Tehachapi chapters of the Kiwanis Club, Rotary Club and Optimist Club — groups Jack also supported during his career in the Midwest. He held numerous positions in Kiwanis and received  a variety of awards, including the International Foundation Hixon Fellowship.

Jack was also a Boy Scouts of America troop leader early on in his career, and later served on the Kern County Boy Scout Council. He received the Silver Beaver Award for outstanding lifelong service to Scouting.

Graveside services will be held at 1:30pm on June 21 in Council Bluffs, Iowa at Walnut Hill Cemeteries, Memorial Park. The family wants to thank the staff at Cedarhurst of Blue Springs and Lumicare Hospice for the loving and wonderful care they provided Jack during these last two difficult years.

Jack dearly loved the pets he had throughout his life, most recently Rascal.   Donations in Jacks memory can be made to Midlands Humane Society, 1020 Railroad Ave.  Suite A, Council Bluffs, Iowa  51503.