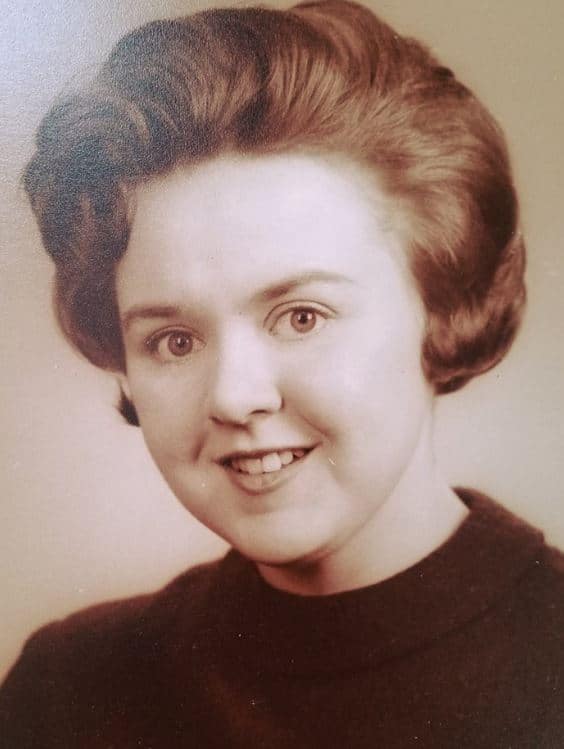 Janet (McCroskey) Morreale shuffled off this mortal coil on Monday, October 1. Jan was born November 14, 1937, 80 years ago, at St. Luke’s Hospital.
Jan loved life, especially when it involved family and friends.  She has good friends from Church Without Walls (CWW) from fifty plus years ago that she still hangs out with.  Some of them led her to a new terrific group of friends called The Wine Group.  She is not the most extroverted person, in fact she’s mostly an introvert.  Which means that she chooses carefully the people that she wants to associate with.  So if she gave you her attention it meant she really cared.
If you crossed her though, or threatened anyone she cared about, you saw the mama lion come out.  She had a long fuse but if it burned to the end… look out.  And if you told her she couldn’t do something, you saw how stubborn, strong and determined she could be. Most of the time, though, she was there with a smile, a happy disposition and was ready to laugh.  When she was out she loved a little bit of red wine or scotch and good food to go with it.
She loved to travel and did a fair amount of what would be considered daring voyages for a young female in the 50’s.  She was traveling, in Seattle, when she met her husband, Roland.  Together they did quite a bit – Europe, the Indy 500, the Albuquerque Balloon Fest, NY at the drop of the hat to see The Lion King, and many other escapes.  As a kid, their son, Craig, benefited from the grand road trips they would take during the summers.  East, West, North, South…everywhere and something different each time.
Most recently her trips were out to San Diego to visit Craig and his family.  She loved Linda and Shayla, and the feeling was very mutual.  Linda’s family would come in when she was there and they loved her very much, too.  They became like an extended second family to her.  She was all set to head out there for Christmas again; ticket purchased. Craig, Linda and Shayla had so many things planned for her, but the best part of her trips out there was just sitting and being with each other.  And her favorite granddog, Murphy, who would lick her ear to wake her up in the morning.
Disney and Disneyland were also passions of hers; Craig and family will be doing a special tribute to her at Space Mountain, her absolute favorite ride, in just a couple of weeks.
Lastly, and certainly not least, is that she was the best mom ever.  She was nurturing, encouraging, protecting and supportive.  And still was right up until the end.  She will be very very missed.
She is survived by her son, Craig, daughter-in-law, Linda, and granddaughter, Shayla Morreale, as well as cousins Aldre Hotujac and family, Susan Hendricks and family, and Jeff Stone and family.
A celebration of life will be held this Saturday, October 6 from 3:30 to 5 at O’Neill’s Pub at 9417 Mission Road, Leawood.