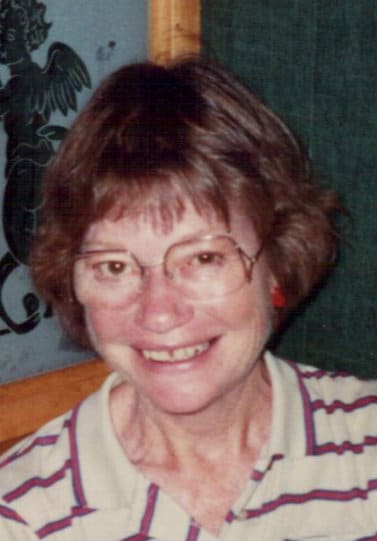 Rua Jean Graebner, of Rocheport passed away Monday, June 30, 2014 after a three year battle with cancer.

Jean was born on April 28, 1926, in Granite City, IL, to Ralph and Ruby (Sloan) Wilson. After graduating Granite City High school Jean was drawn to the University of Missouri School of Journalism. On January 28, 1949 Jean married fellow journalist and photographer Larry Graebner. After receiving her journalism degree from the university, Jean and Larry landed jobs at the Columbia Daily Tribune where Jean worked until 1953 when the first of their two daughters arrived. Larry remained at the Tribune until his retirement in 1980.

After her daughters began school, Jean changed her course and returned to the university. Upon receiving her Master’s Degree in English, Jean began her 26 year teaching career at West Junior High where she taught, English, and Social Studies. She also sponsored the school newspaper, the “Sword and Shield”.

After their daughters were grown, Larry and Jean moved to a 30 acre farm in rural Rocheport where Jean planned, planted and cared for Scotch pines at their choose-and- cut Christmas tree farm.  After Larry’s death in 1999, Jean chose to forgo the Christmas tree operation and let the farm become her personal wildlife refuge.

After Larry’s death Jean began corresponding with a friend from her college days. They spent the next 12 years traveling to Alaska, Mexico, Iceland, Hawaii, Trinidad, Costa Rica and every corner of the United States including cherished days at his cabin in Wyoming where they shared their love for the world of natural history.

Jean was active in many organizations including: the Prairie Foundation, the Conservation Federation of Missouri, the Sierra Club, the Nature Conservancy, the World Wildlife Federation, the Missouri State Park Association, the Friends of Rock Bridge, the Hawthorn Native Plant Society, and the Columbia Audubon Society.  Jean served as secretary for both the Native Plant Society and the Audubon Society.  In 2009 Jean received the Blazing Star Award from the Hawthorn Chapter of the Missouri Native Plant Society and in 2010 received the John E. Wylie Service Award for 20 years of service in promoting and advocating the values of our natural heritage and the native flora of Missouri.

Jean’s family would like to thank Dr. Bala and Nurse Julie, Hospice Advantage especially Susan and Kelly, and the compassionate and caring staff at Ashland Villa for their kindness and loving care.

A private family service will be held at a later date

Memorial contributions are suggested to the Central Missouri Humane Society.

Online condolences may be left for the family atwww.heartlandcremation.com.