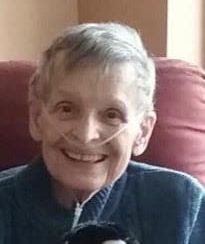 JoAnn Walter, 86, of Independence, Missouri passed away on January 13th from effects of Dementia. Visitation will be held on Wednesday, January 22nd from 3:00 to 5:00 at Heartland Cremation & Burial Society , 6113 Blue Ridge Blvd., Raytown, MO. Private burial at a later date. JoAnn was born on January 10, 1934 in Boonville, MO to Joseph and Anna (Thomas) Crosswhite.
The family moved to Kansas City when JoAnn and her sister, Louise, were young. She graduated from Central High School in 1951. Immediately upon graduation JoAnn and the love of her life, Sidney Walter, eloped to Miami, Oklahoma and were happily married for 51 years til his death in May of 2002. They were blessed with two children, a son Franklin Joseph, and daughter Cynthia Louise, and they joked that they had one of each so there wasn’t anything else to try for so had no more kids. JoAnn loved to travel – especially to Las Vegas where she was once featured in a Kansas City Star article about her love of playing the slots – not even waiting to get to the casino but playing the slots at the airport while Sidney waited for the luggage. This was a love that she continued to enjoy with her daughter up to the final year of her life. Her love of travel was continued after Sidney’s death by trips with her grandson and her sister-in-law.

She was preceded in death by her parents, her husband, her sister Louise in November, 2019, & her sonin-law, Kenneth Cawthon.

Memorial contributions can be made to One Community Hospice & Pallative Care, 15600 Woods Chapel Road, Suite A, Kansas City, MO 64139.

JoAnn’s family is happy in the knowledge that she is now at peace, her mind has been restored and she is reunited with her beloved Sidney and they are happily dancing to Elvis. We will love you and miss you for the rest of our lives.