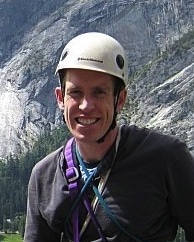 Jon Apprill, 40, Carlsbad, CA passed away January 15, 2015.  A visitation will be held 9:30 AM on January 24, 2015 at St. John Francis Regis Church, followed by a memorial mass at 11:00 AM. Jon was born August 10, 1974 in Kansas City, MO. He had an adventurous spirit and a love for the outdoors. Jon excelled at numerous sports including running, cycling, triathlon, rock climbing, skiing, paddle boarding and fly fishing. Jon loved planning and tackling new rock climbing routes throughout the U.S, and touched the lives of many friends along the way. He was very well educated, with BS and MS degrees in materials engineering and his interest in sports medicine drove him to go back to school to receive a doctorate in physical therapy.  Jon was preceded in death by his mother Donna Apprill.  He leaves behind his father Mike Apprill of Raytown, MO, sister and brother-in-law Amy and Aran Mooney of Falmouth, MA, brother and sister-in-law Adam and Carrie Apprill of San Francisco, CA, nephews and nieces; Liam and Alana Mooney and Cooper and Finley Apprill.  Memorial contributions are suggested to Outward Bound, a non-profit wilderness education program, emphasizing strength of character and determination to thrive in life.  Contributions can be made at the church services or directly through the Outward Bound web site: www.outwardbound.org/donate/