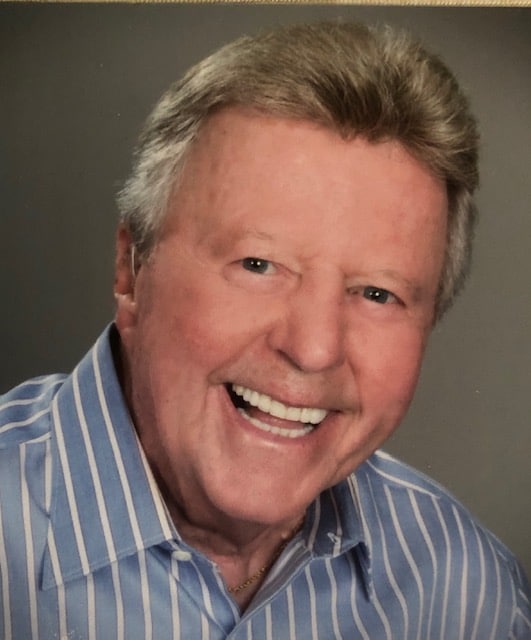 Larry Ray Vilmer, 88, of Lees Summit, Mo. passed away November 22, 2019 at his home. A Celebration of Life Services will be held at 5:00 pm, Wednesday, March 11, 2020 at Woods Chapel United Methodist Church, 4725 NE Lakewood Way Lee’s Summit, Mo. Following the celebration there will be a gathering in his honor at the Lakewood Oaks Country Club, 651 NE Andrews Circle, Lee’s Summit, MO.

Mr. Vilmer was born October 31, 1931 in Sedalia, Mo., to Guy R. Vilmer and Lucille R. (Frame) Vilmer. Growing up in Sedalia, Mo. he graduated from Smith Cotton High School in 1949, where he was named Outstanding Athlete of his class. Upon graduation, he became a semi-pro baseball player, where he became a star player and was called up for try-outs by both the Chicago Cubs and the St Louis Cardinals. He joined the U.S. Air Force in 1952 and served in the Korean War, as well as in Japan. Upon leaving the Service in 1956 he returned to Sedalia and enrolled in Central Missouri State University in Warrensburg, Mo., where he received his Bachelor’s Degree in Education and a Master’s Degree in Guidance Counseling.  He also returned to playing semi-pro baseball, and it was during one of the games he met his future wife Nancy Ann (Vaughan) Vilmer. He was fond of telling the story of seeing a “beautiful brunette” watching from the stands and telling his teammates she was the girl for him. They were married on December 1, 1957 and remained married until her death on December 17, 2013. After graduation from college, he became a counselor with the Vocational Rehabilitation Services in Kansas City, Mo.  He later was promoted to District Supervisor of the District Independence Office, retiring on February 28, 1990 after 32 years of dedicated service.

Some of Larry’s passions outside of work were golf, carpentry and traveling. He was an avid golfer and one of the highlights of his life was playing at the St. Andrews Golf course in Scotland. Larry and Nancy also enjoyed traveling the world together. One of their favorite places to visit was Maui were they would take the road to Hana to the Palapala Ho’omau Church that looked out over the coastline.

Larry loved helping others whenever he could and wished that everyone would “be kind to one another”. He enjoyed interacting with people of all ages and took pleasure in learning about what was going on in their lives. Relationships with family and friends were a large part of his life and they helped to support him through all of the ups and downs. Larry was diagnosed with ALS in 2016 and courageously fought the battle and focused on how to help others instead of focusing on himself. For the past three years he was a constant supporter in raising money to help fight the disease that affects so many people. Larry’s faith in God never wavered which gave him the strength to appreciate every day he was here on earth.

The family wishes to express gratitude to everyone who helped support and share a part of their lives with Larry for so many years. You have touched their hearts with your kindness and they are forever in your debt. The family also suggests contributions in lieu of flowers be given to the ALS Association Mid-American Chapter.