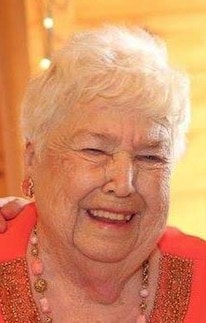 Obituary – LaVerne Albrecht
LaVerne Teresa Albrecht passed away on February 23, 2017 at her home in Columbia, MO. William Gruenloh and Agnes (Keeven) Gruenloh of Florissant, MO welcomed LaVerne to the world on March 11, 1932 where she grew up until her marriage to William H. (“Bill”) Albrecht June 16, 1951. They moved to their dream home, a log cabin in the Warrenton area, for 30 years until Bill passed away on August 31, 2011.
LaVerne worked for many years at Universal Match in Ferguson in an essential position as the Art Checker (editor). She is missed by her daughter, Mary Easley (Glenn) of Columbia, Missouri, and her sons David (Maureen) Albrecht of Lake St. Louis, Missouri and Daniel (Linda) Albrecht of Warenton, Missouri, her sister Roberta Gittemeir of St. Charles, Missouri, her brother Geno (Lynda) Gruenloh, of St. Charles, Missouri, sister-in-law Genevieve Albrecht as well as six grandchildren and ten great-grandchildren, numerous nieces nephews and other relatives. LaVerne was preceded in death by her brother, William Gruenloh, Jr.
LaVerne had many old friends she loved. She made new friends in Columbia: Marty and Helen, all of her Quiddler-playing buddies, Tara who knows how to get extra fun from stability balls, and Ruth Anne who massaged away the troubles. Her friends know that she was giving, ‘spunky’, and resourceful. LaVerne loved supporting thrift shops and giving things a new purpose, cheering the St. Louis Cardinals, watching Wheel of Fortune and Shark Tank, and new adventures like her first plane ride, wading in the ocean, vacationing at Lake Ozark, and exploring Lincoln Park in Chicago.
LaVerne wanted to be useful even after her death and has donated her body to medical science. A memorial gathering will be held at a later date. A private family service will be held.
LaVerne was especially appreciative of the extraordinary caring of Dr. Anne Fitzsimmons. Memorials are suggested for Kennedy’s campaign #513489 at www.youcaring.com