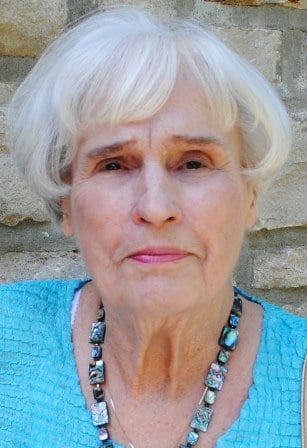 Mary Lou Sparkman was born 01/08/1931 at Saint Luke’s Hospital, in Kansas City, Mo. to Albert and Ernestine Sparkman. Her father, Albert, was a traveling sales man for Rival Manufacturing while her mother, Ernestine took care of the family. Mary Lou was born just 11 short months after her sister Martha during the Great Depression. Mary always joked that her parents must have been excited for the news! She grew up with her siblings Delores, Martha, Carol, and Mike at 1450 W. 51st. Street in Kansas City, MO. In the house her father, Albert, built in 1923 while Ernestine was pregnant with Patsy, who was taken to be with the Lord at a much too early age.

Despite being raised during the depression, Mary never talked about being without. Mary was given piano lessons, attended Swinney Grade School at 47th and Holly in Kansas City, MO. Completing her education and receiving her diploma from Southwest High School Kansas City, Mo.

Mary did not like going to the grandparent’s farm. Perhaps, it was Kit, the horse, trying to rub her off his back, fishing, or just the general outdoors, she would write letters home with tear drops on them making note of the tears. Dolores said Mary was always a bit theatric! When something made her mad, Mary would pack her suitcase; sit on the steps in the house so everyone would see she was leaving. Her sisters described her as forgetful, a little daring, but most of all she was filled with laughter and a friend to all.

Mary and her siblings were dropped off at St. Paul’s Episcopal Church on 40th and Main, Kansas City, MO. every Sunday for 9:00 a.m. Sunday school. Mary considered herself a cradle Episcopalian, being baptized, confirmed, and even married at St. Paul’s. The Episcopal Church with its structure and reverence gave Mary comfort in her times of need. Mary even found the dashing and talented love of her life, John Basil Wakeland, or Jack as we all knew him, at St. Paul’s Young Peoples Group.

Mary and Jack were joined together in Holy Matrimony on 05/12/1950. Two children were born from this union David Wakeland 09/26/1951 and Lisa Wakeland Smith 08/02/1958. Jack was a traveling salesman like her father while Mary stayed at home with the children like her mother. Mary and Jack loved their social life and made many fine friends through the years from the churches they attended, to the neighborhoods they lived in; or the dance club they enjoyed for many years together. This was reflected even in the vacations taken with friends, and extended family. Like the trip to Mexico Jack, Mary, David, and Lisa took with the Fisher family. Whether it was shopping in Saltillo to find that special trinket, swimming at the Hotel Cola de Caballo in Monterrey, or the burro ride up Horsetail Falls fun was always had by all. Living in Texas allowed Mary, Jack, and the kids to have many adventures from crabbing in Galveston Bay, tubing in New Braunfels, Texas, playing bridge with friends, to working on Barry Goldwater’s campaign many happy memories were made. Mary cared for Jack up until his death in1999 remaining faithful to his memory, and never remarrying.

Mary loved to cook, willing to try new recipes clipped out of the paper, or from a new cookbook she bought, or a recipe from the food network. Mary also loved to read, go to the beauty shop, and watch her Soaps, even convincing David to watch with her so they could discuss what was happening.

Mary was blessed with great health most of her life, but after losing her beloved Mother to Cancer she was always fearful of the disease. Her fears were realized November 14, 2014. Mary was blessed with a sound mind and the ability to make her own decisions when given the diagnosis at the hospital that her time was limited. She made the decision to allow Lisa and her husband Jim to take care of her in her final days with Hospice assistance. Lisa and Jim were so thankful and privileged to have the opportunity to care for her as she had also cared for her husband and her mother-in-law at the end of their lives, allowing them to die with dignity at home. Through careful and frugal living Mary on her own managed her household to the time of her death even able to leave a legacy for her children. No small feat since she had never had her own career or was part of the business world. Mary did not suffer; she accepted her outcome and made peace with the Lord. The end of her life came quickly and prevented her from saying good-by too many dear friends and loved ones. However, Mary was blessed to see her grandchildren Justin Smith and Andrea George as well as her great grand-child Caitlin George before going to her heavenly home.