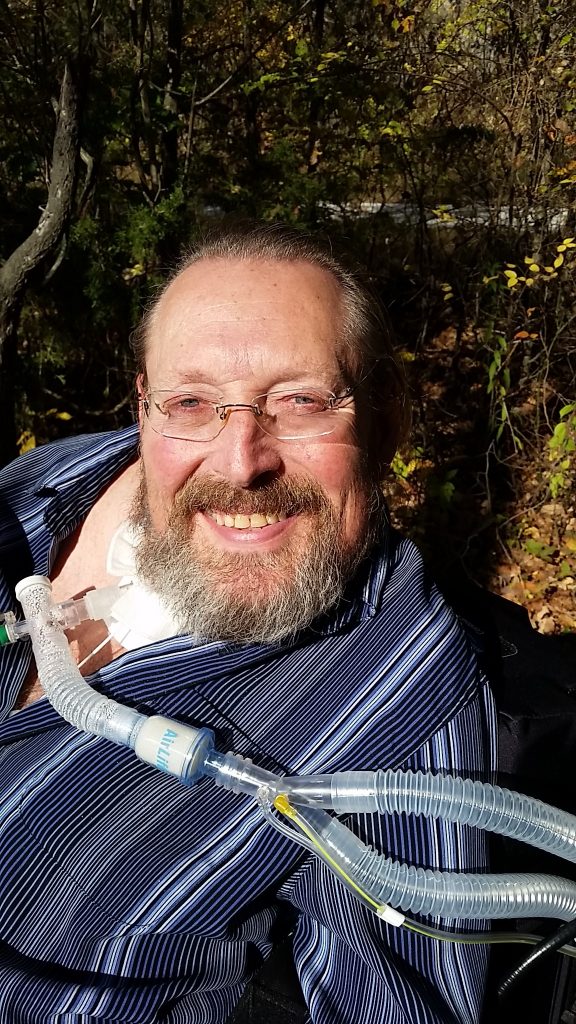 Michael “Mike” Oliver Peplow, age 58, passed from this earthly existence in the early morning of Thursday August 18th, 2016 at the University Hospital after a brave battle with an unexpected cascade of serious health issues and sepsis. A gathering to celebrate his life will be held at 7:00 p.m., Thursday, September 1 at the Reichmann Pavillion, 2300 E Walnut St, Columbia, MO 65201. During the 27 days he spent in MICU he was lovingly attended by his partner of 31 years, Kathy Weinstock. Many thanks to the doctors, nurses and staff of the hospital for all of their exceptional efforts and caring. Mike was born in Rolla, MO December 17th, 1957 to Frances and Warren Peplow. He suffered a partial spinal cord injury on July 4th, 1975 resulting in quadriplegia and still was able to graduate with his Rolla High School class in 1976. He moved permanently to Columbia, MO in 1987. He attended the University of MO and graduated with his Bachelors degree in Fine Arts and Computer Graphics. He was employed full time with the University for over 7 years, working in the Memorial Union in the Adaptive Computing Technology Center with students and faculty. After a serious illness in 2007, he retired from the University. He continued as a consultant with the Telecommunication Access Program for the Internet (TAP-I) program linking those eligible with Dragon Naturally Speaking software and provided training in its use. Throughout his time in Columbia, MO he at one time served on the board of directors at Services of Independent Living, he was a long time and current active member of both the City of Columbia’s Disability Committee and the Transportation Commission. He had many types of interests and hobbies including walking on the MKT trail, enjoyed day trips and travels like to the St. Louis Zoo, art museums, the KC Renaissance Festival, art fairs, and concerts. He had many beloved animal friends He is survived by his brothers Ronnie Peplow and Wayne Peplow and many cousins, nieces, nephews and other family and many friends. He is preceded in death by his parents, and his brother David Peplow.