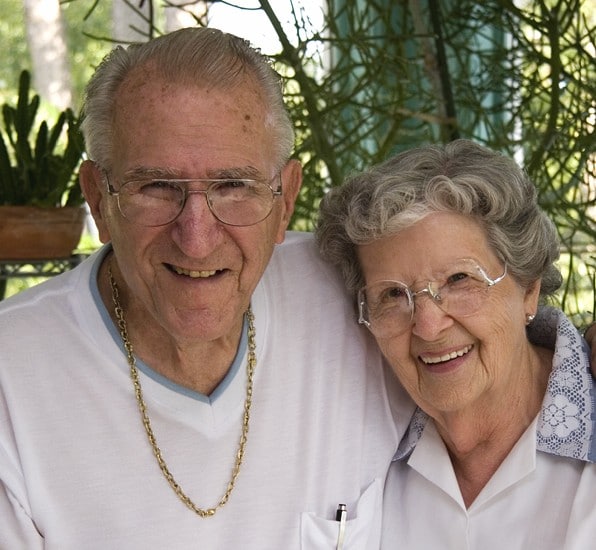 Neil Rex Hermance, a loving, caring and giving man, left a large void on this earth on Tuesday, May 6 when he left the physical realm to find his peace. He passed in the family home with the love of his family surrounding him, and although he struggled with Alzheimer’s disease the last years of his life, he never allowed it to steal the memories of his history or the faces and names of his family.

He started this life journey on July 4, 1920 when born in a sod hut in Orchard, Nebraska to a humble farm couple, Albert and Rosabel Hermance. As a child, he was convinced that the fireworks celebrations were in honor of his birthday. He had two sisters, Bonnie and Nina Faye, and a brother, Keith. During his childhood the family traveled often following various farming jobs available to them. In 1938 he graduated from high school in LaGrange, Indiana and attended many of the subsequent high school reunions including his 70th in 2008 where he received a plaque as the oldest attendee.

In many ways, his life began the summer of 1938 while working lakeside for Circle Pines Center at the Chief Noonday Camp grounds in Michigan when a beautiful young girl became completely infatuated with the handsome lifeguard. Although engaged to another, his affections soon turned to the shy teenager who would become his wife of 73 years. As Neil worked as a manager for a Detroit city Cooperative, their courtship continued for two years with many wonderful hours spent on Belle Isle in Detroit, Michigan. In 2006 hand-in-hand the couple returned to Detroit and relived the stories and memories held in the soil of the Isle. It is impossible to tell Neil’s story without including his relationship with Ruth.

On December 26, 1940 the couple ignored the wishes of Ruth’s parents and eloped. They settled in Cleveland, Ohio where Neil continued managing and promoting the Cooperative way of living. He embraced the cooperative philosophy of people working and playing together with respect and this resulted in the couple’s start at collecting friendships and admirers that lasted lifetimes.

When World War II started, Neil was working for the United Coop Paint Factory, which made deck paints for the Navy. He decided that he would enlist in the Air Force. He successfully took all the tests and scored high, but much to his chagrin, he was rejected because they discovered he was colorblind! It was funny that he had been preparing paint colors for the Navy for quite a while. To make up for this, he enlisted in the Navy to serve as a Radar Man Second Class on the PC1121 in the South Pacific. He received the Asia Pacific Theater Ribbon with one battle star and the victory metal and was discharged in January of 1944. It was the only time that he and Ruth were separated during their 73 years of marriage.

After the war, they lived in Carrolton, Ohio and Neil continued his work with the local Cooperative. Their first dog, Hash, joined the family and continued to hold a place in his heart to the end. Neil then made a move to a Hutchinson, Kansas Cooperative where his reputation as a respected leader within the organization lead to a position with Consumer Cooperative. He was given a nine state region and the charge to promote cooperatives through recreation. Ruth traveled with him, and they became an impressive example of how a married couple should live, play and work together. Neil was a skilled square dance, ballroom, and folk dance leader and as a couple they cleared the dance floor so onlookers could bathe in the sight of them dancing together. They were also expert puppeteers both making the puppets and performing shows with them. During the summer they travelled the nine state region giving performances at all the state fairs.

Due to radiation exposure during the war, Neil received the news that the possibility of having children was nil. Ruth had also received a similar diagnosis due to other problems, so they both threw themselves into cooperative work and the thrill of teaching other people’s children. In 1949 they discovered that Ruth was pregnant with his daughter, Lee Ann. Neil immediately decided to give up his position with Consumer Cooperative as the thought of being away from his family for any length of time was unbearable. With this decision, he became the first professional square dance caller in the Kansas City area when he started the Bells and Bows Square Dance Club. A second child, Randy, was born in 1951. Throughout the child raising period, he continued to attend and participate in various recreational camps in Missouri, Michigan and Wisconsin.

When square dance calling no longer supported his family, he started a small television repair shop and later started a career with the Bendix Corporation, which is now Honeywell. At that time, he was a Production Supervisor for a “white room” and the work was highly secretive. He was a well-loved boss and once again developed lifelong relationships with many of his employees.

During this time the family settled in Lee’s Summit, Missouri in a small new housing development with a swimming pool. Neil and Ruth became respected self-appointed leaders of the village teen club. Neil called square dances regularly and taught folk dancing. He helped with the swim club and was often a judge in swimming competitions and the pool clown for summer festivals. He taught both of his children the importance of having pride in what you do, but showing dignity and praise for others when you lose. He was a wonderful, gentle, and supportive father. Values from his cooperative years were also instilled in his children regarding treating all people equally and seeing beyond skin color, sexual preference, ethnicity, religious or political beliefs or any other difference. Neil never met a person he didn’t love and the abundance of friends he accumulated throughout his lifetime was his treasure.
Lee Ann left home after high school and began a family shortly thereafter giving Neil two grandsons, Kelly and Tracy. She is currently married to Tim Stamm. Neil immediately became the father he never had and his best football buddy. Tim lovingly called Neil, “The Big Guy,” and with much respect arranged for Neil to be a part of the Honor Tour to Washington, D.C. in 2010.

As empty nesters, Neil and Ruth began experimenting with an RV lifestyle in the mid-1970s over weekends and vacations. They purchased a Lake Paradise membership for RVs and Neil hosted many birthdays, Father’s and Mother’s Days, and other special events by bar-b-cueing wonderful meat dishes. Many wonderful memories are held by all the children and grandchildren of the family and friends.
Neil retired from Bendix in 1979. Then in January 1980 he underwent quadruple coronary by-pass surgery, which failed. The surgery was repeated in March of 1980, and his prognosis was a life expectancy of 5 years, but he knew when he had a good thing going and decided to stick around. Healthy eating became the norm. He quit smoking without hesitation, and Ruth’s loving care carried him all the way to the age of 93. They immediately decided not to waste a moment of time. They purchased a larger travel trailer and their truck “Big Red” and began their twenty years on the road by heading to Alaska. They took the trailer via ferry to visit various ports and then hopped off the ferry and continued to travel southward through Alaska and Canada until they arrived back home. Eventually they sold their home and became full time gypsies. They travelled to every state in the US except Hawaii. Never really going overseas, they loved this country and the beauty that existed here. Again, they collected friends like other people collect souvenirs. Some of their best friends only spent a few hours with them on the road.

To support their habit, Neil and Ruth developed an Austrian lead crystal jewelry business. Their home base was in Mission, Texas where they sold merchandise at shows throughout the winter months. Their display was beautiful and the jewelry work exquisite. Neil quickly developed a following of cute little old ladies that always brought him all their broken jewelry to be fixed. He gladly did repairs throughout the shows whether the item was purchased from him or not.

Kelly later married and gave Neil a beautiful granddaughter, Emily who was killed in an automobile accident in 2002. It was a huge blow with Neil and Ruth wondering why they were still here and such a precious young life was taken from all of us. Kelly and his wife, Laura then gave Neil a handsome grandson, Tim, and another gorgeous granddaughter, Katie.

Tracy married Sandi and provided the gift of an older great granddaughter, Dimi who added to the family husband Scott and a talented great great grandson, Conner.

In the late 1990s, Neil and Ruth decided that being on the road was getting too difficult and that they would like to move back home to Lee’s Summit. Their gardens became their next great love. Neil took great pride in his outside flowers and trees as Ruth nurtured the tropical garden appearance of their sun room. They worked hand-in-hand with the earth, and it was a great joy. Bonsai plants also became a fun hobby for Neil. He loved working with the computer and took several computer classes and lots of notes from Lee Ann so he could bring himself into the 21st century. Besides missing plants in all their travels, they also missed having a dog. Sweetie, an ornery Papillion, soon became the immediate second love of Neil’s life. That little dog doted on him and always gave him silky tongue licks to prove it.

In 2006 Neil was given a diagnosis of Alzheimer’s, but it wasn’t until a fall in 2008 that he began to have some problems with this disorder. He eagerly agreed to move back to the country when Tim and Lee Ann extended the offer. Again, loving the RV life he purchased a large unit, which was set up with a lovely deck and ramps with adjoining flower gardens. After two years of hardship through cold winters and hot summers, it was decided that a move into the house was a better idea. There Neil continued to enjoy family gatherings, card playing, scrabble, dice games and of course, TV. Another love was annual trips in his kids RV to Colorado, South Dakota, Arkansas, Central and Southern Missouri, Oklahoma, Michigan, Indiana, Arizona and all states in between. Over the last four years, he continued to enjoy season tickets to the New Theater Dinner plays, which brought him much laughter and a full belly.

His long battle with Alzheimer’s never managed to take from him the memory of his family or the history of his life. For that we are grateful. He was a role model for the way to live a good life. There will not be a public service. In 2010, he gathered with over 65 family members and friends as he and Ruth celebrated their 70th wedding anniversary. It was always their belief to honor, love, and visit the person while they were here. They were grateful for that time together. He was the “Head of the Herd” for this family, and although we will miss him dearly, he lives within everyone that ever met him.