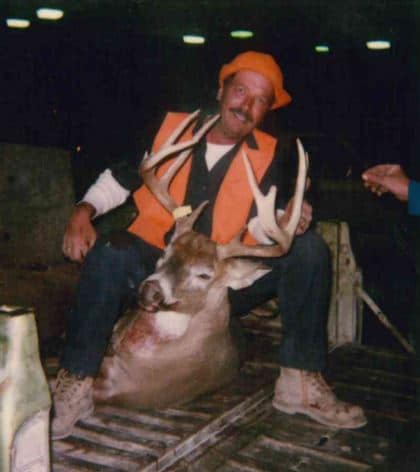 Paul Watson, known to friends and family as “Hooty” passed away on November 10, 2017 at the age of 61. He was a lifelong resident of the Kansas City area. He worked at American Body as the transport driver until his disability from a motorcycle accident. He loved deer hunting, fishing (especially with the grandkids), the KC Chiefs and Royals and he was a huge NASCAR fan. He also enjoyed all kinds of music and there was not a western song that he would not two-step to. He could always make people laugh until it hurt. He will forever be remembered for his comedic soul and love of life and family. When he made bad choices, he always owned the consequences and moved on with life. When it came to good choices, and he did make a few, he made it very clear to many that marrying Robbin brought him more happiness than he could ever express. His love for her was unconditional and he appreciated her to no end. He loved to wheel and deal, and if he left this earthly world owing you money, it’s safe to say that debt is now a write-off, sorry about your luck. In Heaven he’s the life of the party and there is one big Farkle game going on right now. He is telling jokes, throwing back a few and making everyone laugh. That is the Paul we all know and the Paul that we will forever miss.