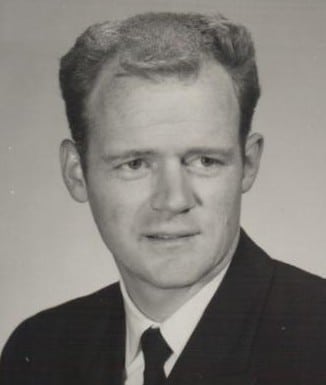 Mr. Paul Noble Young, age 72, died peacefully on Monday, March 31, 2014, at the Missouri Veterans Home in Mexico, Missouri where he had been a resident for many years.  Noble was born in Shelbyville, Kentucky on September 5, 1941, to Paul and Elizabeth Young.

At Eastern, Noble continued his college basketball career while completing his Bachelor and Masters’ Degrees in Industrial Arts and obtained his teaching certificate. He also attended the University of Missouri and completed all coursework for a Doctorate Degree. During his college years, he met his beloved wife Barbara Ann (Baker); they wed on June 5, 1965 and were happily married for 48 years.

Noble taught Industrial Arts in the Louisville Kentucky Public School System until he joined the United States Navy in 1968. After completing Officer Candidate School in Newport, Rhode Island, he became a Radar Navigator, flying many missions over Vietnam and Southeast Asia. During his Navy duty Noble was stationed in Pensacola, Florida, Whidbey Island, Washington, Guam and Japan. Noble received the National Defense Service medal, Vietnam Campaign medal, Vietnam Service medal, Presidential Unit commendation, Navy Unit commendation, Armed Forces Expeditionary medal (Korea), Air medal and Combat Action ribbon. After discharge in 1972, he served in the Naval Reserve for several years. Noble was dedicated to his family and together they pursued their passions of teaching, traveling, snow skiing, basketball and woodworking. Noble was very proud of his service in the United States Navy and of his Eagle Scout Rank earned in 1955.

In 1973 Noble and Barbara joined the US Department ofDefense School System and taught at US bases in Mannheim and Stuttgart, Germany for 11 years. Germany provided the opportunity to fulfill two of Nobles’ passions-traveling throughout Europe and snow skiing in the German, Austrian and Swiss Alps. Noble taught Industrial Arts and was an accomplished woodworker; he later served as Deputy Principal at the Stuttgart American High School.

After his return from Germany, he resided in Columbia until he was left disabled after significant surgery and became a resident at the Mexico Veterans Home. The family was blessed by and thankful for the loving and compassionate care that was provided to Noble for many years by the Veterans Home Staff and Administration.

Noble is survived by his wife Barbara Ann Young (nee Baker) and son Eric, both of Columbia, Missouri. He was preceded in death by his parents and a sister Mary Jane. He is survived by two brothers Floyd Thomas (Sharon) of Junction City, Kentucky, John Allen (Mary Ann) of Jefferson City, Missouri and two sisters, Betty B. Teele and Helen C. Greene (Donnie), both of Danville, Kentucky.

A memorial service will be scheduled at a later date. It is the wish of the family that memorial contributions be made in Noble’s name to the Missouri Veterans Home, #I Veterans Drive, Mexico MO 65265. Contributions will be utilized to support the Veterans Home Staff in caring for their Veterans.