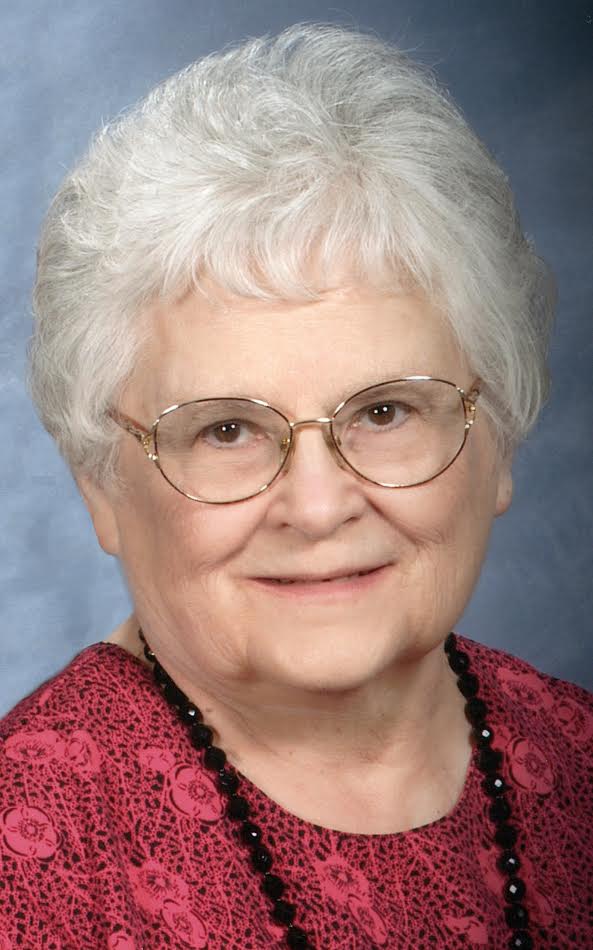 Rhoda Rhoads, 85, passed away at home in Olathe, KS. Rhoda was born to Rev. John P. and Sarah Tschetter on March 1st, 1932, in her grandfather’s home near Carpenter, SD, and was raised in the Carpenter area along with one sister, Sylvia, and two brothers, Walter and Gerald. She attended one year of high school in Huron where she lived with her Aunt Lydia, then moved with her parents to Lewellen, NE, where she graduated from high school in 1950. She then returned to Huron where she worked for Northwestern Public Service for several years. Rhoda met Vernon Rhoads at a mid-week prayer service at a rural neighbor’s home near Forestburg. They were married on August 24, 1953, in Wessington Springs, SD. Following Vernon’s Army training, the couple spent several months together in Ft. Lee, VA, before he shipped out to Korea, after which Rhoda returned to Huron and her job at NWPS. After Vernon’s return from Korea, the couple settled 14 miles south of Cavour, South Dakota, to farm and raise livestock and their three daughters.

Rhoda was a wonderful homemaker, sewing clothes for the girls and making the most delicious homemade bread, as well as gardening, canning and freezing her produce, and raising her prized chickens. She sold eggs for many years and supplied freshly dressed chickens to a restaurant in Mitchell. She caught, butchered and fried her first chicken at the age of 8 while her parents were away in town. She and her little brother, Gerald, devoured the whole thing! When her folks came home, she said “We were hungry!”

In 1975, Vernon, Rhoda and the girls moved to Olathe, KS, where he worked in the physical plant at MNU until his retirement. Rhoda was thrilled to provide day care for her two grandchildren, Derek and Sharla, whom she dearly loved, and had many delightful stories to tell about their childhood experiences.

Rhoda gave her heart to the Lord at a tender young age and served Him faithfully throughout her whole life. She was devoted to her family, whom she dearly loved. Her family enjoyed her crispy fried chicken and old-fashioned homemade ice cream. She was a wonderful hostess and graciously prepared dinners in her home for many friends, relatives, college students and visiting missionaries. She enjoyed providing delicious homemade apple and cherry pies for funeral dinners at the church.

Rhoda was preceded in death by her husband, Vernon, whom she cared for many years, her parents, two sisters and two brothers.

She was especially happy to hear that her two great-grandbabies, Evelyn and Richard, were born just two days before her death.

Rhoda was interred in a private family burial service on Thursday, September 7th, at 11:00 AM at Leavenworth National Cemetery. Arrangements were handled by Heartland Funeral Home, where the obituary can be viewed online.

The family is most appreciative of the care received through Olathe Hospice in recent weeks.

A memorial service is scheduled at College Church of the Nazarene in Olathe, Ks, on Saturday, September 16th, 2017, at 4 PM, with visitation one hour prior to the service at 3 PM.

Psalm 23
The LORD is my shepherd; I shall not want.
He maketh me to lie down in green pastures; He leadeth me beside the still waters.
He restoreth my soul; He leadeth me in the paths of righteousness for His name’s sake.
Yea, though I walk through the valley of the shadow of death, I will fear no evil: for thou art with me; thy rod and thy staff they comfort me.
Thou preparest a table before me in the presence of mine enemies; thou anointest my head with oil; my cup runneth over.
Surely goodness and mercy shall follow me all the days of my life: and I will dwell in the house of the LORD for ever.