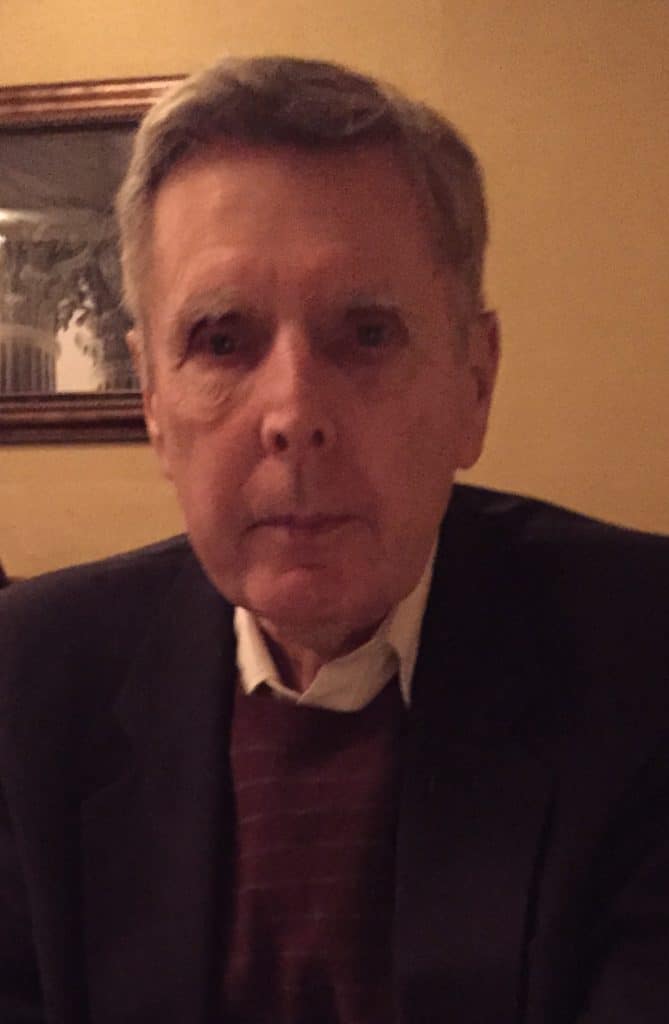 Richard Claude Thompson, PhD, 81, of Columbia, passed away shortly after midnight on Tuesday, 30 June 2020 at his home in Columbia, MO, minutes after having a final taste of 16-year-old Lagavulin. Until returning to his home after discharge from University Hospital on 27 June 2020, he had been a temporary resident at Cedarhurst of Columbia for several months; this followed several 2019 hospitalizations and stays in skilled nursing facilities.

Dr. Thompson was born on 12 March 1939 in Kansas City, MO, the only child of the late Claude S. Thompson and the late Norma (Kuchmann) Thompson of Bethany, OK. He attended public schools in Wichita, KS, and Midwest City, OK. An exceptional student, he was co-valedictorian of Midwest City High School class of 1957 and received scholarship offers from several universities. Having decided to become a chemist at the age of 9 (he declared he was a Brooklyn Dodgers fan at the age of 8), he selected the University of Chicago for his undergraduate studies. Richard “Dick” joined Phi Gamma Delta fraternity, began playing varsity baseball as a freshman and furthered his lifelong love of learning, the sciences and literature. He worked in the lab of Henry Taube, PhD, who was awarded the Nobel Prize in Chemistry in 1983. In the lab he met Gilbert “Gil” Gordon, PhD, a postdoctoral student who assumed an assistant professor position at the University of Maryland in College Park, MD, and took Richard with him as his first student upon Richard’s graduation with an SB in Chemistry in 1961.

Earning his PhD in Chemistry in 1965, Richard returned to Chicago and spent a year as a postdoctoral fellow at Argonne National Laboratory in Lemont, IL, with the late James “Jim” Sullivan. In 1966, he was hired as an assistant professor and taught inorganic chemistry at Illinois Institute of Technology in Chicago for one year. In 1967, he came to the University of Missouri (MU) in Columbia, MO, where he spent the next 35+ years. In addition to his regular teaching, research and publishing activities, he mentored graduate students; played on the department softball team (the Dodgers moved to L.A. but he remained a lifelong fan); was funded by the Department of Defense; served as program chair for one Midwest regional American Chemical Society (ACS) meeting and general chair for another; was an invited speaker at a special ACS symposium at a national ACS meeting in Los Angeles honoring Henry Taube, PhD; was keynote speaker for one inorganic mechanisms conference at the University of Leeds, West Yorkshire, England and an invited speaker at several other mechanisms conferences in England, Wales and the Czech Republic; served as a rotating project officer in Washington, DC, for the National Science Foundation (1990-91); and had been associate chair and director of graduate studies for several years before his retirement on 31 December 2002, at which time he was granted the title of Professor Emeritus. Immediately following his retirement, Dr. Thompson, with his usual generosity, agreed to teach two non-inorganic courses when the department had an emergency need.

Learning of Dr. Thompson’s passing, Professor Emeritus Kent Murmann, 92, instrumental in bringing Dr. Thompson to MU, said “Dick was a great chemist, a great man, a fine teacher and I am proud to have had him as a member of the Chemistry Department.” Murmann mentioned Richard’s years-long collaboration with the late Evan Appelman, PhD, an internationally recognized inorganic chemist at Argonne and said their work was “top notch, first tier in inorganic chemistry.” Another collaborator, Glen Frerichs, PhD, retired from Westminster College’s chemistry faculty, commented on Richard’s generosity in sharing knowledge, lab space and materials.

Richard was a lifetime member of the American Chemical Society, a member of the Health Informatics Information Technology (HIIT) Section of the American Public Health Association (APHA) and for many year years served on the board of The Missouri Review. Following his retirement, he attended annual APHA meetings and meetings of the North American Association of Central Cancer Registries (NAACCR) with his wife. He was an avid traveler with a keen interest in American history and Native American culture. He loved visiting museums, zoos, breweries, distilleries and good restaurants in every country that he and his wife, often with family members and friends, visited. He was a supporter of many museums in the US (including the Museum of Art and Archaeology in Columbia), Canada, Hawaii, Great Britain and France.

Dr. Thompson is survived by his wife of 50 years, Jeannette Jackson-Thompson, a brother-in-law, Earl Jackson of Bethlehem, PA; Earl’s wife, Lou; their children, Bev Johnson, Barb (Brendan Vaughan), Becky, Bruce and Brenda Kohler (Whitey); Betty Jackson, widow of Robert (Tony) Jackson; their children (Terry, Toni Lynn, Robbie and Trudy); Earl’s and Tony’s 19 grandchildren (including Jack and Bridgette) and several great-grandchildren; other Jackson family members, including Cary (Judy) Rohr and Kay Raithel; and numerous friends. Among friends of 50 years’ duration who mourn Richard are Mary Ellen Benson, Gemma Fickess, Richard “Dick” Grupp, John Parker, Trudy Gardner, Alice Benfer and Kee and Diana Groshong. Jeannette often said that Richard married her because his German shepherd, Kirschwasser, fell in love with her and she married him so she could join MU’s Fortnightly Club gourmet group. Kirsch died after 7 years but they remained married and members of the same gourmet group until Richard’s death.

He was preceded in death by his parents; uncles Verlin Thompson and Leaton Kuchmann; aunts Hilda Kuchmann and Margaret Kuchmann Pettit; cousin Vernon Pettit and his widow Beth Conover-Pettit; and brother-in-law Robert “Tony” Jackson. He was also preceded in death by his fraternity brother and best man, Robert “Bob” Benson, and his friend of nearly 50 years, Alvin Ray.

The family wishes to thank Richard’s long-time primary care physician, Dr. Michael LeFevre; his brilliant neurologist, Dr. Joel Schenker; staff of University Hospital, especially Dr. Cynthia “Brea” Lombardo; and staff of the now-closed Adult Day Connection, the Neighborhoods (especially Dr. Benjamin Crenshaw) and Cedarhurst (especially Ryan East). The family also thanks Compassus Hospice, their equipment supplier Aero-Care and Infinity Home Care for their rapid responses and compassion in the last days Richard spent on earth; Terry Robb for coming to the house and cutting Richard’s hair; neighbors Jane and John Abel and Charlene Boyes and Jim English as well as other members of the Park Hill Improvement Association; faculty and staff of the MU Chemistry Dept., Dept. of Health Management and Informatics, Missouri Cancer Registry and Research Center and other organizations; and the many friends and colleagues who gave support.

In recognition of his lifelong commitment to science, Richard’s body has been donated to the University of Missouri School of Medicine’s Gift of Body Program. A Celebration of Life service will occur in the future when a viable date can be set. In lieu of flowers, donations in Dr. Thompson’s memory may be made to the APHA HIIT Enrichment Account, c/o Diane L. Adams, MD, Treasurer, 17032 Barn Ridge Drive, Silver Spring, MD 20906; The Missouri Review Trust (https://www.missourireview.com/donate/); Central Missouri Humane Society (https://cmhspets.org/donation-form/); Museum Associates in support of the Museum of Art and Archaeology (https://maamuseumassociates.org/ ) or another local charity/museum/university program of one’s choice. Condolences may be left below.