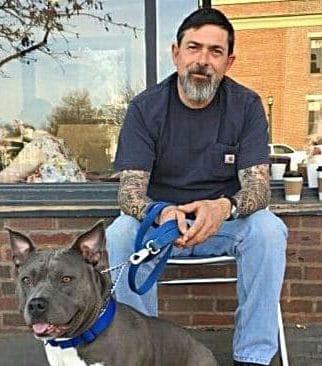 He grew up with his extended family in New Gloucester, Maine. Bob spent most of his adult life living in Kansas City, never forgetting his family and friends in Maine, frequently visiting and planning on living there upon retirement. He was always a true “Mainer.” Bob traveled through many careers from cooking at Milano’s and opening Carraba’s to working at Home Depot. He loved the smell of freshly cut lumber and thought no one would resist a perfume named “Sawdust.” No matter where he was or what he was doing, he always invested 100% of himself. Being a minimalist, Bob embraced the “Keep it Simple, Stupid” philosophy. Nothing made him happier than getting things either organized or gone… much to Ann’s dismay. He enjoyed helping out, fixing up, giving his all. Bob’s interests included carpentry, cooking, gardening, skydiving, bowling, remodeling, motorcycling, fishing, bicycling, pranking and joking around. He bicycled the Katy Trail and motorcycled up to Sturgis. He was a “living canvas” for several local tattoo artists, primarily at Mercy Seat and, as he told it, never cried or complained. The only coffee shop he visited was The Broadway Café, every day, where he appreciated the baristas and the atmosphere, having many animated conversations with friends about life. Bob enjoyed traveling. His goal was to hit every state in the United States. He made it to 46. He loved taking in the scenery, all the people, and the cultures, especially, the small towns. Bob could be contrary, opinionated, and often, unyielding. But mostly, he was caring, compassionate, generous, and loving. Family was most important. He was everything a husband should be. He was a loving father, raising his two boys to manhood and being very proud of their accomplishments. His love of family extended to his friends and wonderful neighbors. Through his organ donations, he will live on in those he has never met. He will live forever in our hearts.

He was preceded in death by his father, Leonard Jerome Donovan, and his mother, Shirley Haskell Donovan.