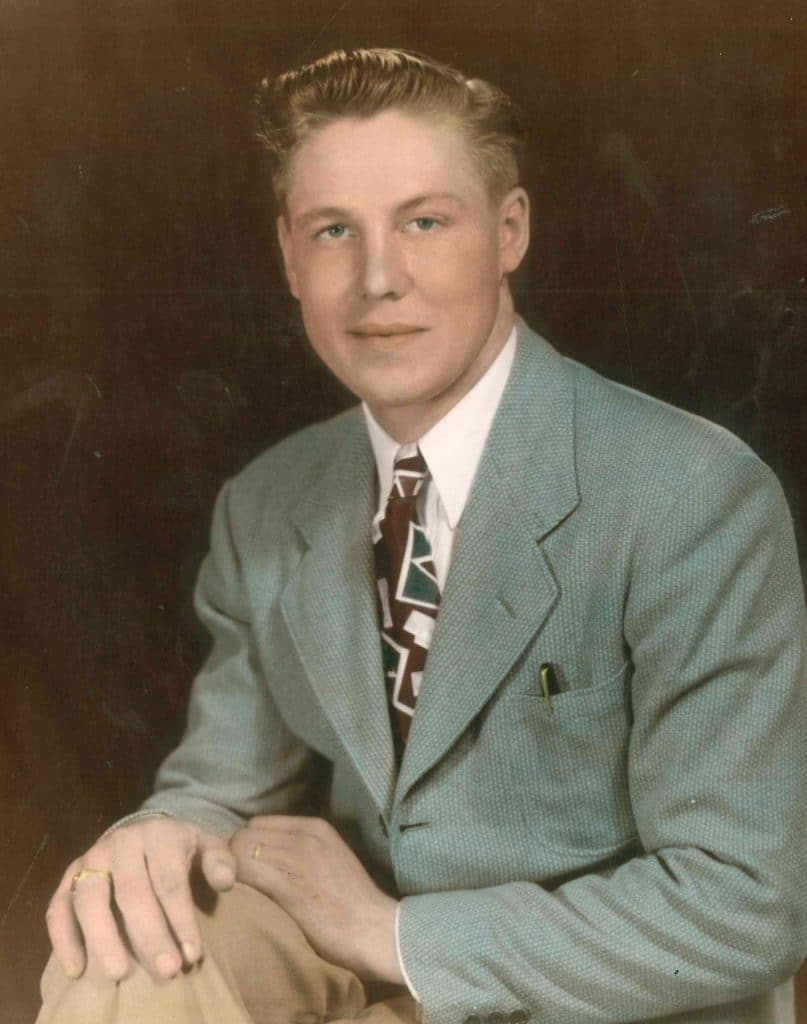 Bob was born on April 8, 1926, to William Cleveland and Callie Lee (DeLaporte) Rhodes in Hannibal, Missouri. Bob was always grateful to Clyde Priest, who introduced him to his beautiful, intelligent, and vivacious younger sister, Doris Marie Priest. Doris and Bob were married on October 12, 1947. He called her his “Raven-haired Beauty.”

Bob grew up on a dairy farm in New London, Missouri. He graduated from Hannibal High School and later earned his Bachelor’s Degree from Drury College.

Never afraid to try new things, Bob was a pioneer in many ways. He was the youngest railroad fireman in Missouri when at age 19 he worked on the Burlington Zephyr. Bob owned a lucrative cosmetic company during the 1960s, then spent many years as a successful executive and company owner in the nascent cable  television industry.

Civic duty and giving to others were important to Bob. He was a member Springfield Junior Chamber of Commerce (President 1962-1967); Missouri Junior Chamber of Commerce (Young Man of Year 1963); National Pachyderms (Vice President); Pachyderm Club (President, Lafayette County, Missouri chapter, 1981), and was active in the Shriners. Bob formed the first women’s chapter of Lion’s Club International in Higginsville, Missouri. He was a dynamic member and supporter of the American Cancer Society. He was a delegate to several National Republican Conventions and ran unsuccessfully as a Republican candidate for the Missouri House of Representatives.

You couldn’t take the farm boy out of Bob. To the delight of his  grandchildren, for many years he and Doris owned a “gentleman’s farm” in Higginsville, Missouri. The animal population fluctuated but at various times included African geese, Nubian goats, a Brahma heifer, horses, llamas, miniature donkeys, a St. Bernard dog, as well as an exotic “herd” of Manx cats.

God and spirituality were paramount to Bob. He practiced his faith, studied the scripture, and treasured his church experience throughout his life. Bob was also an avid reader and student of all things historical. His love of learning never waned.

Bob was preceded in death by his parents, two brothers, Cleve and Bill, sister, Ann, and wife, Doris.

In lieu of flowers, memorial  contributions are suggested to The Lafayette Cancer Coalition.