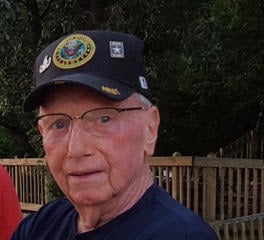 Robert Peter Kephart passed away on the 11th of October, 2019 at his home in Columbia, Missouri. Pete was born on the 3rd of October, 1936 to Harry and Rose Kephart in the Bronx, New York and graduated from Cardinal Hayes High School. He enlisted in the United States Marine Corp and met his wife Shirley Eldridge while serving as an Embassy Guard at the U.S. Embassy in Bonn, West Germany. He then re-enlisted and retired from the United States Army after a total of 21 years of military service. Pete retired from a second career with the City of Columbia. Pete was foremost a Yankees fan, then a runner, square-dancer, gold prospector, avid reader, supporter of the arts, and volunteer for many years with the University of Missouri Concert Series.

Pete was preceded in death by his parents, his brother Charles Kephart, and sisters Florence Roggemann and Constance Mulkeen.

In lieu of flowers, contributions can be made to Central Missouri Honor Flight of Columbia Missouri. Semper Fi.