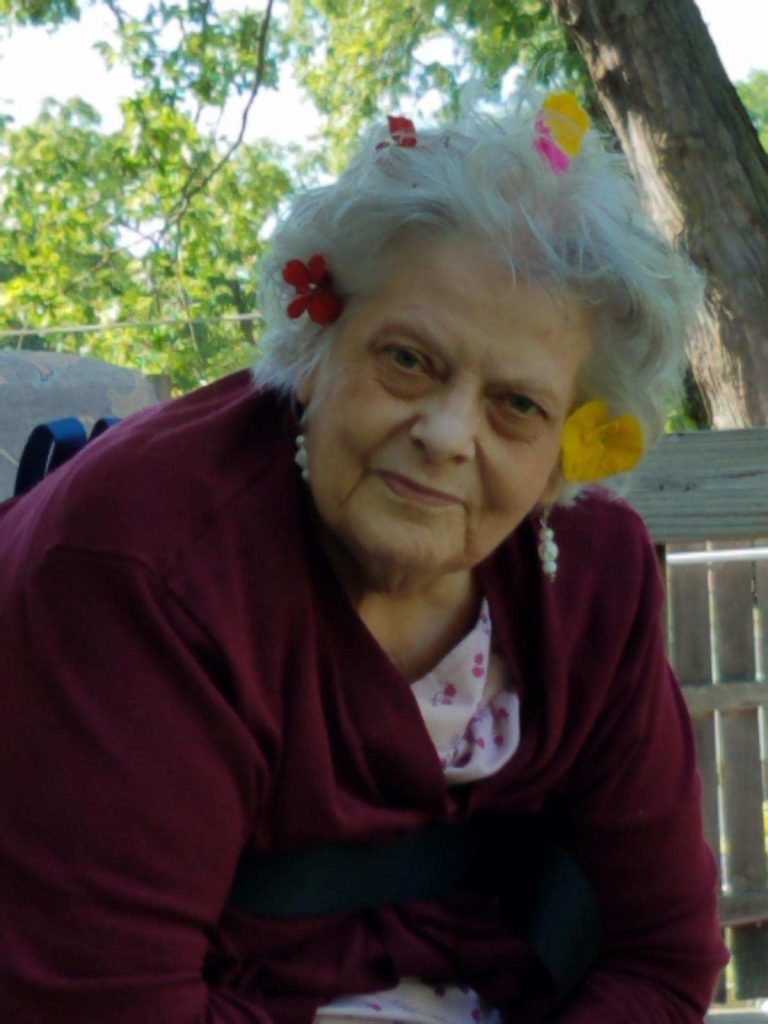 They made their final big move to Kansas City where  Rose’s sister, Jean, who married Fred’s brother, Terry, lived.  Fred and Terry worked together in the tunneling business. Eventually Rose’s sister, Patty, and her brother, Philip, moved to the Midwest.   Terry and Jean are deceased. Patty and Philip still live near Kansas City.

Rose and Fred purchased an old farmhouse in Kansas City, Missouri, in 1972 where they lived with their five children. Rose was a busy homemaker, wife, and loving mother and grandmother.  She was a warm and generous hostess, welcoming many into their home. She gave unselfishly to anyone who needed help and had a heart for the “underdog.” She and Fred helped raise three of their grandchildren in that old farmhouse.

Rose loved working in her flower garden.  She had a green thumb and loved to share her plants with others. Her favorites were yellow roses.   Many great memories were made on her front porch swing where she often sat to visit with friends and family, enjoy her flowers, and feed the birds.

She took particular joy in making Christmas special for her family.  Thousands of Christmas lights framed the house and the well house in the front yard every year. The decorations included nativity scenes, wreaths, reindeer, and even Santa in his sleigh on the roof.  Of course, any holiday, special event, or family gathering was occasion for her to bake fresh bread and cinnamon rolls. She had the talent of baking without a recipe. We all enjoyed the fruit of her labor!  Grandma Rose taught several of her grandchildren to bake bread, too…..a tradition well worth passing on!

It was always one of her dreams to open a restaurant.  That dream was finally realized, though short lived. Patriot’s Bar and Grill, in North Kansas City, Missouri, was open for a few months in the fall of 2011.

Mom spent the last 2 years of her life living with her youngest son, Merv, and his wife, Tiffany.  Her other children, and her sister Patty, came often to visit and to help with her care. Her health prevented her from doing the gardening she loved, but she still enjoyed watching the birds outside the window where Merv and Tiffany had placed 2 bird feeders.  Children and grandchildren came to visit often. She was able to keep in contact with her siblings with help from her children. Mom wanted to go back east to see her family, so Leesa organized a road trip and off they headed to the hills of West Virginia one last time.   In the last weeks of her life, Mom was blessed to see and talk with all her children, all her living siblings, and many of her grandchildren and great grandchildren.

She testified to having received Christ as her Savior when she was a teenager.  We are blessed to know that Mom is in heaven with Jesus and with other loved ones who have gone before.  We will see her again. She is no longer bound by the constraints of her worn earthly body. She is free!  Praise God, she is free!